WASHINGTON, Jan. 5 (Yonhap) -- The incoming U.S. administration of Donald Trump should keep increasing pressure on North Korea to get the communist regime to return to the negotiating table on ending its nuclear program, outgoing Secretary of State John Kerry said Thursday.

Kerry made the remark in an "exit memo" ahead of his departure from office, saying the threat posed by the North's nuclear program is "among the gravest our country faces today" and the U.S. should never accept Pyongyang as a nuclear state.

"In the coming months, we must remain steadfast -- through diplomacy, deterrence, and pressure -- to build a sustained, comprehensive, and relentless campaign that increases the costs on North Korea until it makes a strategic decision to return to serious talks on denuclearization and complies with its international obligations," Kerry said in the memo.

Kerry said the outgoing administration is handing off to the next administration "a strong foundation for increasing pressure on Pyongyang that will be critical to address this threat," noting that the Security Council adopted the toughest resolutions ever on North Korea twice in the past year. 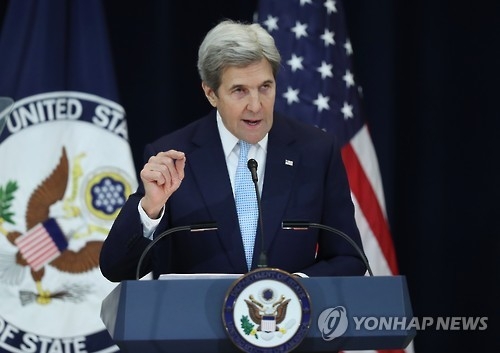