WASHINGTON, Jan. 5 (Yonhap) -- South Korea, the United States and Japan agreed Thursday to step up joint efforts to increase pressure on North Korea after the communist nation threatened that it's close to perfecting a long-range ballistic missile.

Thursday's talks came after North Korean leader Kim Jong-un said in his New Year's address that the country has reached the final stage of preparations to test-fire an intercontinental ballistic missile in a thinly veiled threat that it's close to developing a nuclear missile capable of reaching the U.S.

"South Korea, the U.S. and Japan agreed to further strengthen joint efforts aimed at making North Korea have no choice but to step forward toward meaningful denuclearization," Lim said during a joint news conference with Blinken and Sugiyama after the talks.

In a joint fact sheet adopted at the talks, the three countries said the "complete, verifiable and irreversible denuclearization of North Korea remains the only viable option to safeguard peace and security."

"North Korea's provocations only serve to deepen its isolation," it said.

The three countries will work together with other partners around the world for full implementation of U.N. sanctions, the document said.

"These sanctions, along with our close trilateral coordination on our respective new unilateral sanctions against North Korea, are the latest steps in our ongoing efforts to convince North Korea that the only path to the economic development and international recognition it claims to seek is by returning to credible and meaningful negotiations on denuclearization," it said.

Thursday's meeting was the sixth round of the vice foreign minister talks the three countries launched in April 2015. 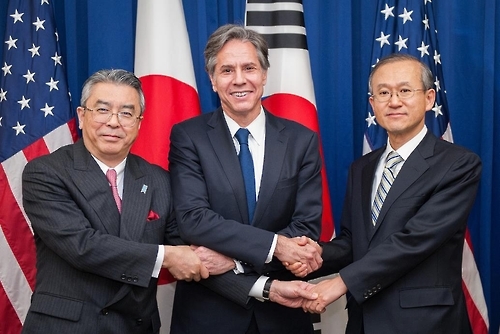