SEOUL, Jan. 6 (Yonhap) -- Shin Moon-sun, a former footballer who now works as a college professor, will run unopposed for the nation's top pro football job, a source close to the matter said Friday.

According to the source, Shin is the sole candidate for the K League commissioner election set for Jan. 16. The deadline for candidate registration was Monday, but it turned out Shin was the only one to submit his candidacy.

The current K League Commissioner Kwon Oh-gap already announced he will not seek a second term.

Under the election rule, if there is only one candidate for the election, the nominated person must earn a majority of the votes of 23 electoral delegates.

Shin ended his professional playing career at the age of 27 due to an injury. After retirement, the 58-year-old made a name for himself as one of the top football commentators in the country.

In 2014, Shin became the president of the South Korean club Seongnam FC but quit a year later. He now works as a professor at Myongji University Graduate School of Archival Sciences in Seoul.

"I didn't know I was the only one who will be running for the K League commissioner election," Shin said. "I wanted to talk about issues on pro football with other candidates, but it's a pity that we can't do that."

Shin said that he decided to run for the job to restore trust in pro football.

"The K League commissioner position has been taken by pro club owners, but it's about time for professional football administrators to step up," he said. "Until the election, I will explain my vision and plans to electoral delegates." 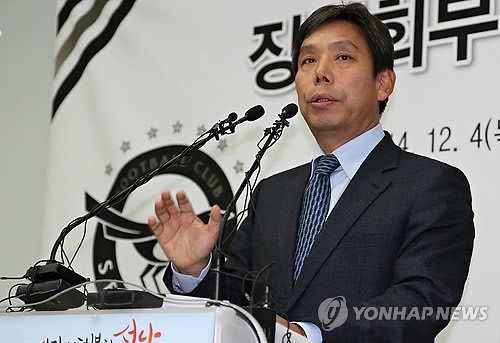