According to the operator of the South Korean pro football league, Shin is the sole candidate for the K League commissioner election set for Jan. 16. The deadline for candidate registration was Monday, but it turned out Shin was the only one to submit his candidacy.

The current K League Commissioner Kwon Oh-gap already announced he will not seek a second term.

Under the election rule, if there is only one candidate for the election, the nominated person must earn a majority of the votes of 23 electoral delegates.

Shin ended his professional playing career at the age of 27 due to an injury. After retirement, the 58-year-old made a name for himself as one of the top football commentators in the country.

In 2014, Shin became the president of the South Korean club Seongnam FC but quit a year later. He now works as a professor at Myongji University Graduate School of Archival Sciences in Seoul.

"I didn't know I was the only one who will be running for the K League commissioner election," Shin said. "I wanted to talk about issues in pro football with other candidates, but it's a pity that we can't do that."

Shin said that he decided to run for the job to restore trust in pro football.

"The K League commissioner position has been taken by pro club owners, but it's about time for professional football administrators to step up," he said. "Until the election, I will explain my vision and plans to electoral delegates." 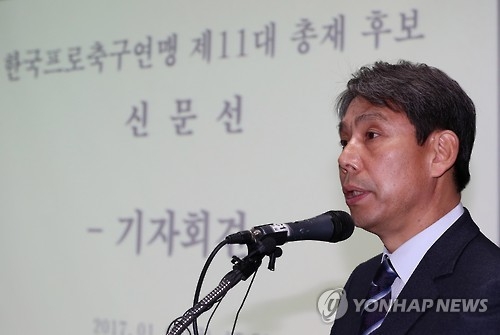 Shin said he is aware of critics' concern that he lacks the ability to secure the league's title sponsor. It has been a custom in the K League for a company affiliated with the commissioner to become the headline sponsor.

Last year, Hyundai Oilbank Co., one of South Korea's major oil refiners, was the title sponsor of the K League since Kwon was then CEO of the company.

Although he only has a little business background, Shin said he will open a new trend for the league's title sponsorship.

"Until now, the commissioner's company had to take the sponsorship, which I think was actually a barrier for other advertisers to step up," he said. "The league is not reserved for certain companies or certain groups. I will open the doors for everyone."

Shin, who holds a Ph.D. in sports administration, claimed the league needs to have "surgery," since the popularity of pro football is dying.

"I want to be the doctor for the K League," he said. "The issue is not about securing sponsorship or not. Unless you can fix the system, the league will face the same problem again and again."

Shin said he will first reinforce the league's disciplinary rules and punishments on corruption to regain fans' trust. Last year, the K League handed down a nine-point deduction to Jeonbuk Hyundai Motors after one of the club's scouts was convicted of bribing referees in 2013. The decision was perceived as controversial or "too light" among football fans.

"You first need transparency in operation," he said. "If I take the job, I will not tolerate any corruption."

Shin, former Korea Football Association (KFA) director, added that he will also closely work with the national football governing body to help the K League and will improve the financial health of second-tier pro clubs and teams run by municipal governments.

"We need a complete overhaul of the league's revenue distribution to clubs," he said. "I will also adopt a salary cap system that suits the league and club licensing system to check the club's health regularly." 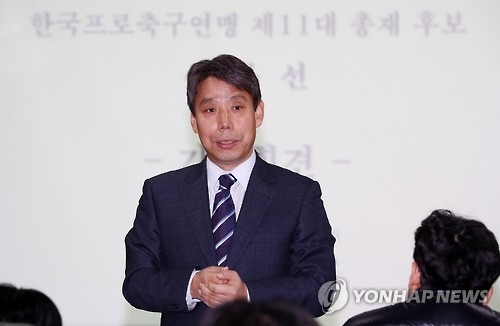