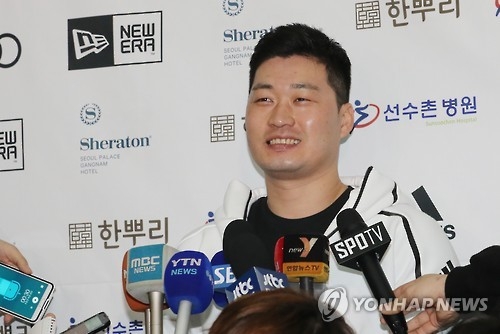 Oh said he often "experiments" with his repertoire at camps but added, "The most important thing is to polish up the pitches that I am able to throw."

Oh may have to halt his U.S. training if he is named to the national team for the World Baseball Classic (WBC), which starts in early March. South Korea manager Kim In-sik initially left Oh off the roster, citing the public's discomfort over the player's illegal gambling history. But with the pitching staff having lost some key arms to injuries, calls for Oh's inclusion have gained traction in recent weeks.

On Wednesday, Kim said he hadn't yet decided what to do with Oh because the team may have to add an extra starter instead of a reliever. Kim insisted, however, that Oh is "clearly someone that we need." Kim and his coaches are expected to meet sometime next week to determine Oh's national team status.

Even if Oh is put on the South Korean team, he will still have to get the green light from the Cardinals. The WBC has always been held in early March, when major league clubs are in the midst of spring training before the new season. Even though the tournament is organized by Major League Baseball, big league clubs have been reluctant to release their players because of injury concerns.

Two other South Korean major league players, Choo Shin-soo of the Texas Rangers and Kim Hyun-soo of the Baltimore Orioles, are on the 28-man national team for the time being, but manager Kim said they both remain doubtful because of their clubs' misgivings.

Oh also said he's bracing himself for a possible showdown with former Korea Baseball Organization (KBO) slugger Eric Thames, who parlayed an MVP-winning stint here into a three-year deal with the Milwaukee Brewers.

The Cardinals and the Brewers are both in the National League Central, and will face each other 19 times in 2017.

The two have never faced each other here because Oh left for Japan's Hanshin Tigers before the 2014 season, which was Thames' first in the KBO.

"I've been following the KBO closely, and I obviously know about Thames," Oh said. "He had a great run in Korea. I'll be careful with him because we will face Milwaukee a lot this year."