The government will also support the development of virtual reality (VR) and augmented reality (AR) content as a growth engine in the era of the Fourth Industrial Revolution while enhancing the people's chances of enjoying culture, sports and tourism activities.

The Ministry of Culture, Sports and Tourism reported its 2017 policy plan to Acting President and Prime Minister Hwang Kyo-ahn. 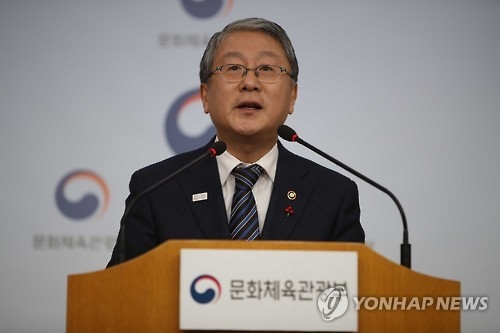 Under the plan, the government will complete 12 arenas for the Olympic Games and ancillary facilities to be used for opening and closing ceremonies during the quadrennial competition and an athletes' village and a media center within this year. Construction of the facilities is currently in the final stages.

The government will also inject 30 billion won (US$25 million) into a program to improve Korean national team players' abilities with a goal of finishing fourth and 10th, respectively, in the 2018 PyeongChang Olympic & Paralympic Winter Games set to be held in the alpine town of PyeongChang and its two adjacent cities from Feb. 9-25, 2018.

South Korea will make full use of the international sports event to enhance the country's status as a culturally rich country by staging various cultural performances, including opera and ballet, during the Olympic period.

To boost the festivity of the forthcoming Olympics, the government will hold numerous events to mark major occasions like G-365 and the torch relay.

As for the cultivation of the cultural content industry, the government will start a new program worth 12.6 billion won to help companies create new content using VR and AR technologies while creating a 20 billion won fund for investment in this field.

Seoul plans to set up government-run facilities where ordinary citizens can easily get first-hand experience on VR devices and technology to increase the public awareness of the new technology.

The government, in addition, allocated a 64.2 billion won budget for 2017, up 55 percent from a year ago, to further develop the gaming industry.

For this, the government will launch a campaign to encourage more Koreans to enjoy vacation at home rather than going abroad and organize a pan-governmental task force to work out measures to promote domestic tourism.

Culture ministry to focus on preparations for PyeongChang Olympics in 2017

Culture ministry to focus on preparations for PyeongChang Olympics in 2017