"Our cultural, tourism and car battery firms are on the verge of facing great regulations from China. Our visit, intended to help those companies, is not a betrayal of the country," said Rep. Woo Sang-ho, the floor leader of the main opposition. "It was economic diplomacy by lawmakers."

Woo said he seems "out of his mind," adding those who make such remarks do not deserve to run as a presidential candidate.

Beijing claims the deployment is intended to target China as well and will escalate regional tension. China has been hinting that it will retaliate economically if Seoul actually deploys the THAAD battery this year.

Liberal opposition parties object to the THAAD plan, saying it won't work effectively in defending against the North's missile attacks and will only damage Seoul's relationship with its top trading partner. 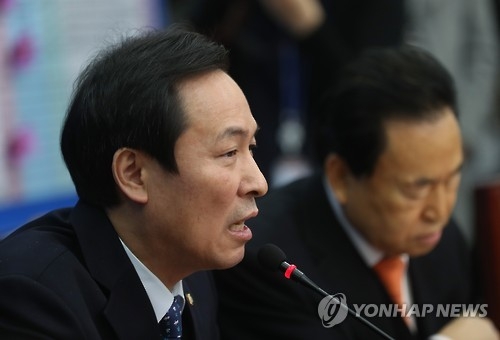 Main opposition calls for resolution of THAAD tension with China

Main opposition calls for resolution of THAAD tension with China