"Moon Jae-in, who is virtually the presidential candidate of the Democratic Party, should have the seven lawmakers end their 'toadyism' and immediately return home," said Rep. Chung Woo-taik, the party whip.

Opposition lawmakers are visiting China, amid Beijing's protest against South Korea's plan to deploy the Terminal High Altitude Area Defense (THAAD) system on its soil. Opposition parties also have been opposing the move that is aimed at improving Seoul's defense capabilities against North Korean provocations.

"It is doubtful that lawmakers' begging in China over a sovereignty issue like THAAD helped the country and its interests," Chung said, adding it is also lamentable that they are being politically used by China.

Chung said he hopes the lawmakers will also meet Thae Yong-ho, who served as a minister at Pyongyang's embassy in London until he defected to the South, and learn about the truth of North Korea.

Concerning the tentatively named New Conservative Party for Reform, which was spun off from Saenuri last month, Chung said most of its policy goals are no different from the ruling party's.

Apparently pointing at Rep. Kim Moo-sung and Rep. Yoo Seong-min, key figures of the planned party, Chung said the dissenters who played key roles in President Park Geun-hye's administration are trying to dodge their responsibilities. Park was impeached by the parliament in December on allegations of corruption. 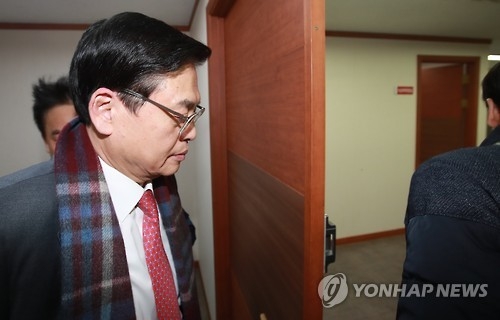