The short clip released Thursday focuses on Jo's 180-degree turnaround from being a bully in high school to becoming a prosecutor and his inner conflicts along the way, according to New Entertainment World.

The much-anticipated teaser was dropped amid the skyrocketing popularity of the previous trailers which have garnered much attention due to scenes that closely resemble Korea's political climate such as power-hungry prosecutors and visits to a shaman. The first clip released on Dec. 1 set a new record for the most-viewed South Korean movie trailer, amassing over 7 million views within a week of its release.

The upcoming political thriller unravels the story of Tae-soo, played by Jo, who becomes a prosecutor in order to wield absolute power. In the process, he takes advantage of a senior prosecutor, the puppetmaster behind the country's politics, and his friend who is a gangster. Jung plays the senior prosecutor and Ryu the gangster.

"The King" will come to local theaters on Jan. 18. 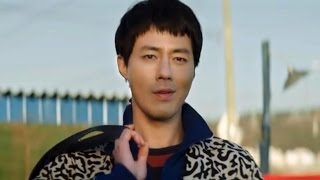