SEOUL/TOKYO, Jan. 6 (Yonhap) -- South Korea expressed "strong regret" over steps taken by Japan on Friday, including recalling its ambassador, in protest against a statue recently set up in front of its consulate office to shed light on its wartime atrocities of forcing women into sexual slavery.

Earlier, Japan decided to temporarily call in Yasumasa Nagamine, its ambassador to South Korea, in protest against the statue installed at the end of last year by a civic group in front of its Consulate General building in the southern port city of Busan. He will likely return to Japan next week.

Tokyo also announced a halt to the ongoing negotiation on a currency swap agreement between the two countries -- an emergeny channel of and the postponement of a high-level economic cooperation meeting. 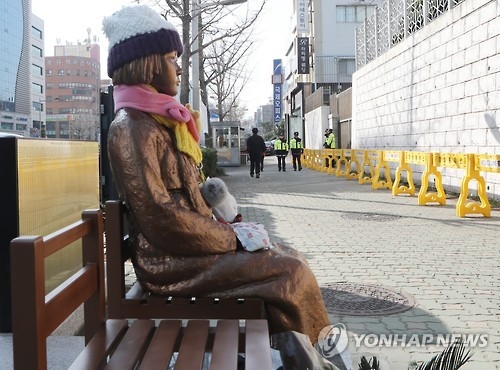