SEOUL, Jan. 6 (Yonhap) -- The new leader of South Korea's ruling Saenuri Party was dealt a blow in an unfolding power struggle Friday as he failed to name members of the ad hoc leadership panel due to an apparent sabotage by key loyalists to President Park Geun-hye.

The party's national standing committee had planned to hold a meeting in the afternoon to appoint a first set of members of the emergency committee led by In Myung-jin.

But the meeting failed to open because of the lack of a quorum. A senior party official raised the suspicion that Park allies boycotted the meeting in protest against In's recent aggressive drive for party reforms.

"Today's incident unveiled the truth of the clique-politics that have ruined the country," In said. "It is regrettable and embarrassing."

In said he will continue his struggles to normalize Saenuri and make it a party loved by the people.

Rep. Chung Woo-taik, the floor leader, said the party will seek to host the meeting next week.

A successful appointment of the members for the emergency committee will allow the party to nominate a new ethics chief, who can punish loyalists even if they stay in Saenuri.

Last week In held core Park loyalists accountable for the political crisis facing Park and Saenuri and demanded they leave the party by Friday, sparking a bitter war of words between Saenuri veterans.

They rejected his demand as of Friday.

Party insiders raised the possibility that In may resign, citing his earlier remark that he would seriously consider his future course if his demand is not met.

Saenuri has been suffering from months of internal feuds which resulted in 30 lawmakers leaving the party last month with a plan to launch their own party in January. The defection reduced the party to the No. 2 position in parliament.

In's reform drive won over a number of party members, who handed In a "carte blanche" on Thursday, entrusting him to determine their fate as party members.

Sources said In is targeting only a few leading pro-Park members including Rep. Suh Chung-won and Rep. Choi Kyung-hwan.

"Reps. Suh and Choi are at the center, but the two are unlikely to resign," a loyalist lawmaker said.

Suh fiercely resisted, exchanging invectives with In over the past week. Choi has not commented on In's demand. 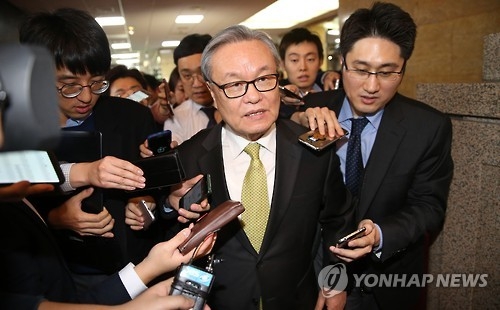