The New Conservative Party for Reform, which will set sail late January, unveiled its platform Thursday which includes a clause that the party will "respect" the two agreements struck in 2000 and 2007 between the leaders of the two Koreas.

The new party's members are mostly from the ruling Saenuri Party, which criticized the agreements as an appeasement and demanded their cancellation.

The landmark agreement in 2000 paved the way for a flurry of inter-Korean exchanges and cooperation, which came to a halt due to North Korea's continued nuclear tests and armed provocations.

Its members had pledged to stick to a hard line position on North Korea and national security issues despite embracing more centrist policies on economy and welfare.

Rep. Chung Woo-taik, the floor leader of Saenuri, said the people will question the identity of the new party, if it expresses support for the declarations without providing relevant explanation.

Concerns are also expressed by some officials of the new party that its move to attract neutral voters may end up losing conservative supporters.

The new party also claimed it has inherited the legacy of the government-in-exile set up in Shanghai in 1919 during Japan's colonial rule. Conservatives are largely reluctant to recognize the ad-hoc government as a source of legitimacy, preferring the establishment of the South Korean government in 1948 as the root of national identity. 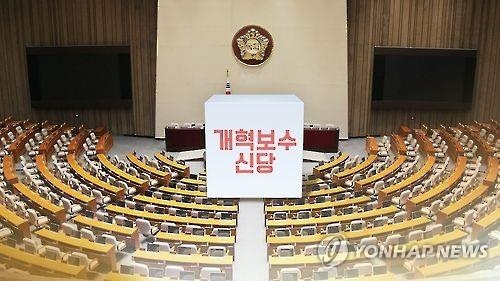