During the event on Thursday, the nervous yet excited members introduced the theme and tracks from its second EP "Romance."

Having released the EP on Thursday, the four members -- Jang-hyun, Hyun-kyu, Chan-dong and Hyun-suk -- will embark on various promotional activities. 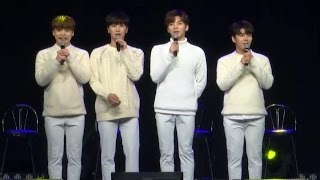