The plan was included in the Ministry of Gender Equality and Family's 2017 policy plan reported to Acting President and Prime Minister Hwang Kyo-ahn.

"We will do our best to uphold the dignity of the victims (of Japanese sexual enslavement)," Gender Equality Minister Kang Eun-hee said during a press briefing on the plan last Friday.

Through this new program, the government will offer 6.6 million won (US$5,544) a month for each of the terminally ill victims in need of hospice care, the ministry said.

Historians estimate that more than 200,000 women, mostly from Korea, were forced to work in front-line brothels for Japanese troops during World War II. Only 40 South Korean victims, mostly in their late 80s, are currently known to be alive.

The amount of monthly aid for living expenses and nursing will also increase to 1.3 million won and 1.08 million won, respectively, this year, from 1.26 million and 1.05 million last year, the ministry said.

Despite her promise to increase care for the victims, Kang sidestepped questions from reporters on what she thinks of the comfort women statue that was installed recently in front of the Japanese Consulate General building in Busan.

"I'm aware that there are some controversies regarding the installment (of the comfort women statue). It's already installed and I don't think it's appropriate for the gender equality ministry to comment," said Kang. 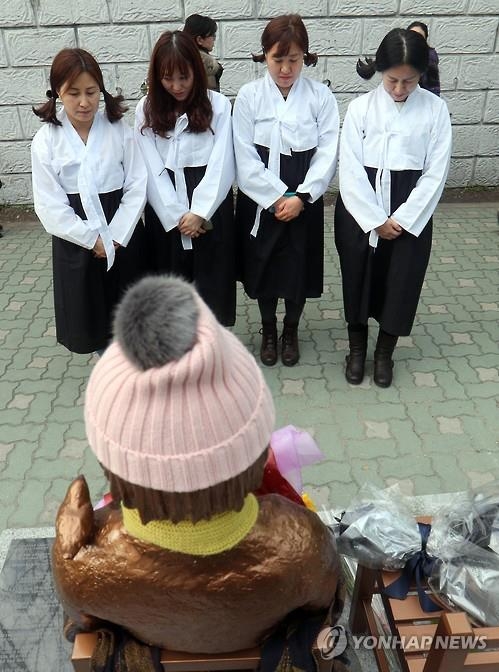 The Busan statue is the second such statue installed in front of Japan's overseas diplomatic missions following the one set up before the Japanese Embassy in Seoul.

It has become a diplomatic thorn between South Korea and Japan, with Tokyo demanding its immediate removal.

The ministry will also launch a test-run program in which teams consisting of public officials and civilian experts will look after the individual well being of each remaining comfort women.

In other areas, the ministry said it plans to develop a region-based "womens' safety index" to study and better protect women from sexual abuse and hate crimes while exerting more efforts to prevent such crimes.

As measures to further spread gender-equal culture throughout society, the ministry will intensify monitoring of television and online media programs and newspapers for any content considered harmful to the culture and distribute its guidelines for making "gender-equal" broadcasting programs.