SEOUL, Jan. 6 (Yonhap) -- The Constitutional Court will ask the police to locate two former aides to President Park Geun-hye who are at the center of a political scandal that led to Park's impeachment, an official said Friday.

The court's justices agreed to file the request with the respective police stations in Seoul's Jongno and Gangnam Wards as both aides appeared to have fled to avoid giving testimony in court.

"We will send summonses to their addresses by mail and request a search by the police at the same time," the court official said on the condition of anonymity. 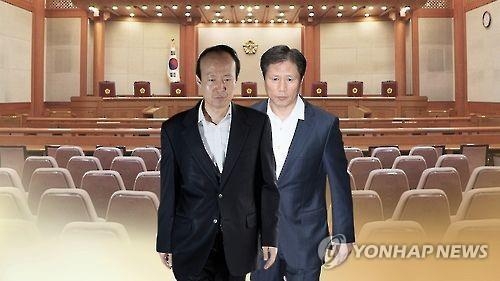 But the court failed to deliver their summonses, as neither could be contacted or found at their registered addresses all week. By law, witnesses who have not received a summons cannot be punished for failing to show up for a scheduled hearing. The court has rescheduled the session for Jan. 19.

Both Lee and Ahn are suspected of helping Park's confidante, Choi Soon-sil, enter the presidential office Cheong Wa Dae without security checks and access confidential documents despite having no government post.

Choi has been accused of abusing her ties to the president to extort money from conglomerates and gain other personal favors. Park was impeached by the National Assembly on Dec. 9 on suspicion of colluding with Choi.