SEOUL, Jan. 6 (Yonhap) -- South Korean girl group AOA revealed the music videos for "Excuse Me" and "Bing Bing," the two lead singles of its first LP "Angel's knock," and the making-of clip about them as well on Monday.

The five-year-old band is confident of continuing its celebrated streak with the two enthralling cuts sharply contrasting stylistically, into which its seven members had put their own artistry honed over the years in the industry.

The video of "Excuse Me" features AOA members as seven female Sherlocks teaming up to investigate a mysterious case, chasing their John Doe, whereas they portray sexy illusionists performing a set of surreal magic tricks in that of "Bing Bing."

Besides the two lead numbers, "Angel's knock" boasts eight highly charming tracks such as "With Elvis" with lyrics written by AOA members as an emotional ode to their fans, which conveys their heartfelt thanks to them for their years of die-hard support; "Lily" featuring Rowoon from FNC Entertainment's new boy band SF9; "Three Out" and "Help Me," the Korean version of their Japanese single "Give Me the Love," a collaboration with the Japanese singer Takanori Nishikawa as a guest vocalist.

Throwing back to 2012, AOA's coveted debut with the single "Elvis" didn't mark an auspicious start. The song and its rendition on stage received mixed reviews by critics, and more critically, the general response of the audience was "eh," finding it no better than a derivative copy of girl numbers pouring out daily.

Releasing mediocre back-to-back singles amid expanding criticism looked like its K-pop career was nearly over, the crucial milestone of the band came with the unexpected "Seol-hyun sensation," giving rise to a series of theft cases of her "real-life-sized" signs and putting her name into the list of the "Muse of Korean Men" following figure-skating star Kim Yu-na and Suzy from missA.

Moving forward to 2017, when it comes to casting a spell on the crowd to work them up into a frenzy, AOA doesn't back off. It is not too easy to find a noise accompanying a girl band, as loud as it is. The onslaught of hundreds of armed girls has always followed AOA, of course, but AOA always teaches them a lesson, proving themselves as still on top. 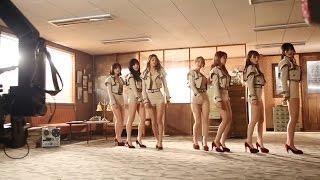