SEOUL, Jan. 6 (Yonhap) -- A row between South Korea and Japan over a recently erected statue symbolizing Japan's wartime sexual enslavement victims flared up on Friday, casting a shadow over bilateral diplomatic relations that had been on the mend following a landmark deal reached on the issue in late 2015.

Earlier, Japan decided to recall in its ambassador in protest against the statue which was set up late last year in front of its Consulate General office in the southern port city of Busan. Its installment came despite strong opposition from Tokyo, which has beefed up its demand for its immediate removal. 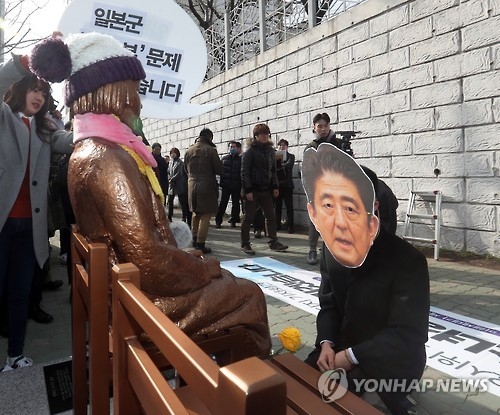 Going beyond what many see as a symbolic diplomatic gesture, Japan also took the step of suspending talks with South Korea on a currency swap agreement and postponing an economic cooperation meeting.

The latest measures represented the strongest ever response by Tokyo in recent years to express its displeasure. Recalling its top envy, in particular, marks a first since Tokyo took such action in 2012 when then South Korean President Lee Myung-bak visited the country's easternmost islets of Dokdo.

The comfort women issue has been a major source of a long-standing diplomatic rift between Seoul and Tokyo. Historians estimate that up to 200,000 women, mostly from Korea, were forced into sexual slavery for Japanese troops during World War II.

In December 2015, South Korea and Japan reached a deal in which Tokyo expressed an apology and agreed to provide 1 billion yen (US$10.28 million) for a foundation aimed at supporting its surviving victims.

The decision was hailed by the international community as a step in the right direction for their bilateral ties although critics called for the deal to be scrapped, saying that Tokyo's apology is not sincere and the government hurriedly agreed without seeking feedback from the victims.

Both sides, however, have not been able to iron out their discord over the original comfort women statue in front of the Japanese Embassy in Seoul.

Tokyo is apparently pushing to get the statue removed in accordance to what it claims was promised by the Seoul government under the deal.

Then came the controversy over another statue which was built in Busan.

Worsening relations with Tokyo might be the last thing the Seoul government might want at a time when it needs more than ever to maintain a unified front on issues such as North Korea's nuclear threat.

That could also put more wrinkles on the tough diplomatic landscape facing South Korea as demonstrated by its ongoing dispute with China over the planned deployment of a U.S. missile defense system on its soil. 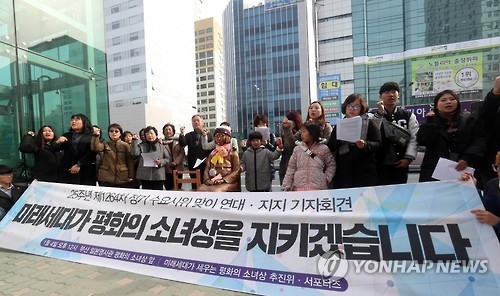 Adding to that, worries are growing over a "leadership vacuum" here in the wake of the parliamentary vote on Dec. 9 to impeach President Park Geun-hye over an influence-peddling scandal involving her and her longtime friend.

"Japan took very strong measures, but they do not appear to be aimed at getting something from us but reflect the voice of right-wing elements," said Park Won-dong, a professor of Handong Global University. "The biggest problem for the government here is that it doesn't have a control tower."

Another dilemma can be that the government has a little wiggle room when it comes to the statue issue. On one hand, it has to maintain good relations with Japan, yet at the same time, it is worried about a possible backlash that the removal of such a symbolic statue could bring about from its own people.

The government appears to be trying to minimize any possible ramifications.

"It appears that Japan was influenced by its own public sentiment against the statue issue," a ministry official said. "The action taken by Japan is quite symbolic and will not likely have an actual impact on our bilateral relations."