Friday's talks come a day after the No. 2 diplomats of South Korea, the U.S. and Japan held a trilateral meeting and agreed that intensifying pressure on Pyongyang is the best way to get the communist regime to move toward denuclearization.

This week's meetings take place after North Korean leader Kim Jong-un said in his New Year's Day address that the country has reached the final stage of preparation to test-fire an intercontinental ballistic missile.

After Thursday's trilateral session, Blinken told reporters that the North's weapons capabilities have made a "qualitative improvement" over the past year as a result of an unprecedented level of nuclear and missile tests.

Blinken also said it is "absolutely vitally important that we exercise sustained comprehensive pressure on North Korea to get it to stop these programs, to come back to the negotiating table and to engage in good faith on denuclearization."

Friday's talks are the fifth round of U.S.-Korea strategic consultations on North Korea policy. 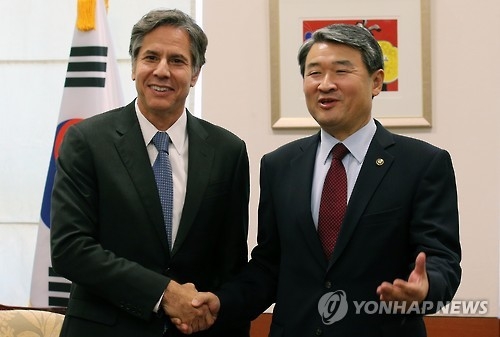