SEOUL, Jan. 8 (Yonhap) -- North Korea aims to complete development of an intercontinental ballistic missile (ICBM) capable of hitting the U.S. mainland by the end of this year or early 2018, a high-profile North Korean defector said Sunday.

North Korea is accelerating its nuclear weapons and missile development as the country's leader Kim Jong-un said in his New Year's speech that the North has entered the final stage of preparations for the test-firing of an ICBM.

Thae Yong-ho, a former North Korean minister stationed in London, said that Kim's message appears to show off the North's nuclear and missile capabilities and lay out conditions under which it could hold talks with South Korea and the United States.

"North Korea has set the goal of developing miniaturized nuclear weapons that can fit atop a missile capable of reaching the U.S. by the end of 2017 or early 2018 as it takes into account political transitions in South Korea and the U.S.," Thae said in an interview with Yonhap News Agency.

"Whether North Korea test-fires an ICBM this year or its possible launch could be successful will depend on Seoul and Washington's response to this issue," he added. 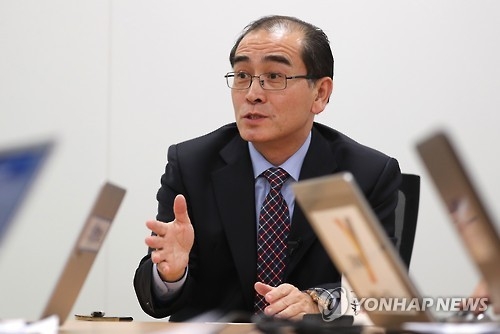 Pyongyang is known to be developing a road-mobile ICBM, known as the KN-08, which may have a range of more than 13,000 kilometers, which is sufficient to hit the U.S. The North has yet to carry out a test of the missile.

Pyongyang claims that it has the technology to make a nuclear warhead small enough to be mounted on a missile, but many military experts have said the repressive regime is still a few years away from mastering such a capability.

"Kim's message indicates that North Korea has completed the development of mid-range missiles with only (tests of) ICBMs being left. It throws questions to Seoul and Washington over what they will do," Thae said.

In the New Year's speech, the North's leader vowed to bolster the country's capacity to launch pre-emptive nuclear strikes if South Korea and the U.S. do not suspend their annual joint military exercises.

Thae said the North would say it has intent to freeze nuclear and missile programs if Seoul and Washington halt the military drills and lift sanctions imposed on Pyongyang.

"But even in that situation, North Korea will not put a satellite launch on the negotiation table," he said, referring to a long-range rocket launch.

This will permit it to develop the necessary technology for ICBMs while claiming it is only developing space vehicles for peaceful purposes, he added. 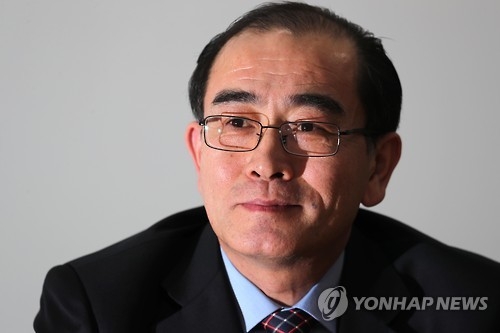 Thae has recently started public activity in earnest since he defected to South Korea in late July with his wife and two sons.

His defection has attracted considerable attention since it showed that even North Korean elites are becoming disillusioned with the regimented country.

He said that North Korean diplomats live on a tight budget at their overseas missions with even ambassadors receiving monthly salaries of US$900-$1,100.

They are also under high pressure to send hard currency to North Korea as Pyongyang's foreign currency earnings are being squeezed by tough sanctions.

"North Korea does not have a system to support medical bills... North Korean diplomats cannot even think of getting regular medical checkups," Thae said, citing the example of North Korean top envoy to Italy Kim Chun-guk who died of liver cancer last year.

"If (a North Korean diplomat) wants to receive proper treatment, money equivalent to the whole budget for an overseas mission is needed," he said.

Touching on international sanctions, Thae said that their effectiveness should be gauged by a change in ordinary North Koreans' sentiment or the North regime's policy failure, not just by statistical numbers.

Thae said that a set of sanctions put severe strain on Kim Jong-un's policy enforcement including the construction of a new developed district in Pyongyang, named "Ryomyong Street."

"Whether sanctions will be further strengthened hinges on China... I think that Seoul and Washington should mobilize all available means to stifle North Korea with sanctions including a secondary boycott," Thae said of penalizing third-country entities involved in business dealings with Pyongyang. 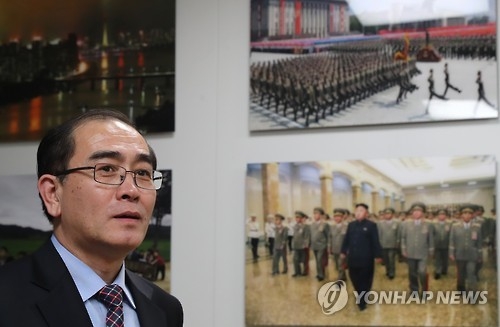 The former minister said that the North Korean regime ostensibly stands on firm footing, but ordinary North Koreans are waging a form of "resistance" in economic areas.

"Despite crackdowns in markets, North Koreans are vehemently resisting security officials' move to take away what they sell," Thae said. "North Koreans are aware that as their leader and the ruling party cannot protect them, they should find their own way for survival."

He stressed the need to make outside information available to more North Koreans to prod them into knowing the reality of the regime.

"An inflow of outside information needs to focus on revealing the fallacy of the Kim family's three-generation succession and doubts about Kim Jong-un's identity as royal blood," he added.

As Thae has started a new life here, he showed willingness to visit the U.S. to speak of North Korea's nuclear problems to Americans and policymakers.

"I will not hesitate to visit the U.S. if my trip helps (the incoming U.S. administration) get to know North Korea's real intent to develop nuclear weapons and establish its North Korea policy in a reasonable and precise manner."

Thae said that he hopes to devote his life to bringing forward inter-Korean unification, regardless of whether a liberal or conservative administration takes office in South Korea.

"I will make efforts to save Korean people from a possible disaster coming from Pyongyang's nuclear aspirations and liberate North Koreans living like slaves from their regime," he added.