SEOUL, Jan. 7 (Yonhap) -- Crowds of South Koreans took to streets across the country on Saturday, demanding that scandal-tainted President Park Geun-hye step down.

It was the 11th consecutive Saturday rally, which first started on Oct. 29 over an influence-peddling scandal centered on Park and her long-time friend Choi Soon-sil. Together the two allegedly extracted 77.4 billion won (US$64.7 million) from conglomerates to set up private foundations controlled by Choi.

With some 1,500 civic groups involved, the first rally of the new year at Seoul's Gwanghwamun Square centered around the Sewol ferry, whose sinking off the country's southwest coast in April 2014 took the lives of more than 300 people, most of whom were high school students on a field trip.

Holding placards critical of Park and lit candles, protesters demanded the immediate resignation of the president and the salvage of the Sewol, which has yet to be retrieved from under the sea.

About 14,720 riot police were mobilized to the scene.

Park was impeached by the National Assembly on Dec. 9 for the influence-peddling scandal as well as negligence in saving the passengers of the sunken ferry.

Earlier this week, the Constitutional Court officially kicked off its procedure to judge whether Park's impeachment should be formalized, with the court's first open hearing. The president did not appear at the hearing.

Similar anti-Park rallies were also staged in major cities across the country on Saturday, including Ulsan, Busan, Gwangju and Daejeon, with protesters calling for Park's resignation and the Constitutional Court's approval of her impeachment. 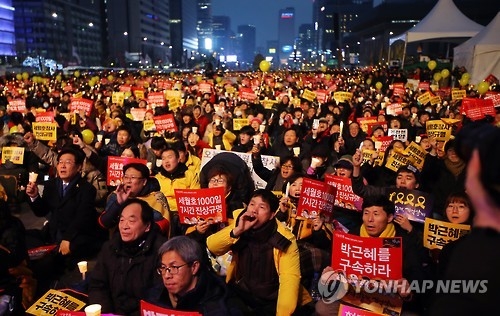 A crowd of Park supporters gathered near the office of the independent counsel investigating the presidential scandal in the southern district of Gangnam in Seoul.

They accused the independent counsel of illegally looking into irrelevant records of Park, including her medical data, and disclosing Park's suspected criminal charges to the media. The protesters demanded the counsel drop their investigation and Park's impeachment be reversed. 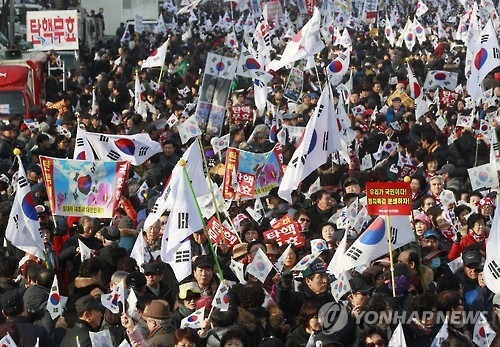