Japanese Ambassador to South Korea Yasumasa Nagamine plans to leave for Tokyo via Gimpo International Airport in Seoul on Monday morning, while the Japanese consul general in Busan, Yasuhiro Morimoto, will also return to Japan the same day.

Last week, Japan decided to temporarily call in its top diplomats in South Korea, in protest against the statue installed at the end of last year by a civic group in front of its Consulate General building in the southern port city of Busan.

Tokyo also announced a halt to the ongoing negotiation on a currency swap agreement between the two countries and the postponement of a high-level cooperation meeting. 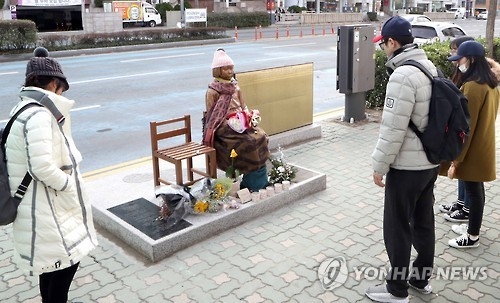 Japan's wartime enslavement of women in front-line brothels has been a major source of a long-standing diplomatic rift between Seoul and Tokyo. Historians estimate that up to 200,000 women, mostly from Korea, were forced into sexual slavery for Japanese troops during World War II.

In 2015, South Korea and Japan reached a deal in which Tokyo apologized and agreed to provide 1 billion yen (US$10.28 million) for a foundation aimed at supporting its surviving victims, euphemistically called "comfort women."

Abe said: "Japan has already paid 1 billion yen to fulfill its obligation. Therefore, South Korea should show its sincerity. The 2015 deal should be implemented regardless of regime change."
(END)