Shortly before he got onboard a plane, National Security Office chief Kim Kwan-jin told reporters: "The security situation of Korea is very serious this year. North Korea's missile programs pose a threat not only to Korea but also to the U.S."

"I am visiting the U.S. because there is a need to meet officials from relevant U.S. agencies before the Trump administration takes office to coordinate policies," he said, adding it hasn't been determined exactly whom he will meet.

It is his second visit since September 2014. He will stay there through this Wednesday to go over various security topic, including the Korea-U.S. alliance and North Korea's missile programs, especially at a time when Pyongyang is ratcheting up efforts to develop intercontinental ballistic missiles (ICBM) that can reach the continental U.S.

In his New Year's address, North Korean dictator Kim Jong-un claimed that the regime was on the final stage of test-firing the ICBM.

There will be discussions on Seoul's decision last year to deploy a U.S. anti-missile system known as THAAD on the peninsula to better counter Pyongyang's rising military threats.

The South Korean government remains undeterred on the plan despite China's strong opposition and retaliatory actions.

Also it is expected that he will have consultations on the Korea-Japan relations, which have recently taken a hit over a statue of a Korean "comfort women" being installed in front of the Japanese consulate in Busan. The euphemism refers to Korean women who were forced to work in Japanese military brothels during World War II. The United States considers a better relationship between the two countries very important for its strategic interests. 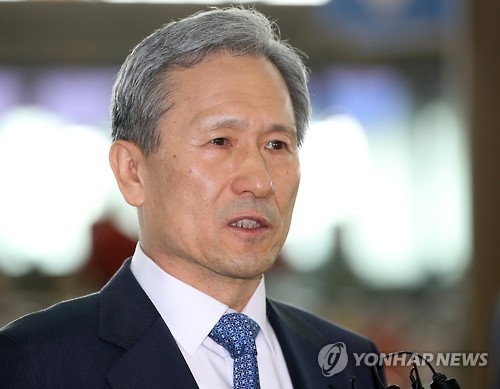