SEOUL, Jan. 8 (Yonhap) -- A South Korean monk remained in critical condition Sunday, one day after he set himself on fire during a mass weekly protest against the country's impeached president, police officials said.

The monk, identified only by his surname Seo, sustained third degree burns across 70 percent of his body, as well as serious damage to various internal organs, including his lungs and heart, they said.

He set himself on fire at around 10:30 p.m. Saturday, while surrounded by tens or hundreds of thousands of people taking part in the weekly vigil in downtown Seoul.

The police believe the 64-year-old tried to commit suicide as they have found a note, in which Seo urged the police to arrest President Park Geun-hye for causing internal disturbances.

They said Seo had been sentenced to an eight-month prison term, suspended for two years, for throwing a Molotov cocktail at the office of the foreign ministry in what was believed to be a protest against the government's deal with Tokyo to settle the issue of Japan's forced sexual slavery of Korean women during World War II.

Hospital officials said Seo's family has expressed a wish not to subject Seo to life-sustaining treatment. 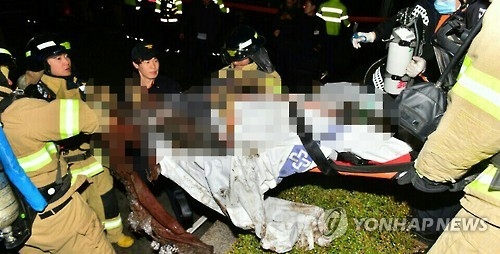 S. Korean monk in critical condition after setting self on fire

S. Korean monk in critical condition after setting self on fire