The ruling Saenuri Party accused Abe of trying to use the thorny issue for his own political gain as he seeks reelection to the top government post.

Opposition parties renewed their demand to nullify a 2015 agreement between Seoul and Tokyo that sought to settle the issue once and for all.

Such reactions came after the Japanese prime minister, on a Japanese TV program, demanded that Seoul remove the comfort women statue in front of the Japanese embassy in Seoul, along with a new statue erected last week near the Japanese consulate in South Korea's second-largest city of Busan.

Abe was also said to have claimed that his government has lived up to its end of the 2015 deal by providing 1 billion Japanese yen (US$8.6 million) that was meant to care for South Korean women who had been forced into sexual slavery by Japan before or during World War II.

"Prime Minister Abe urged South Korea to show its sincerity, saying Japan has paid the 1 billion yen as promised. Such remarks do not seem appropriate as they seem to show his attempt to take advantage of the diplomatic issue between the two countries for his rule and election," Rep. Kim Sung-won said in a released statement.

"Abe must stop his attempt to create tension between the two countries, and understand that strategic cooperation between the countries is more important than ever," the ruling party spokesman added. 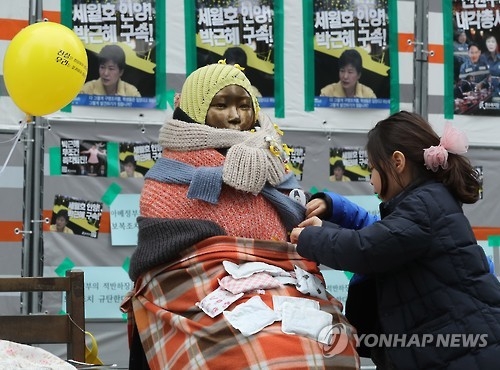 The main opposition Democratic Party called Japan a shameless criminal who has the "audacity" to demand the removal of a statue representing its past wrongdoing.

"It is deeply disturbing and sad to see a situation where the wrongdoer claims to be the victim," Democratic Party spokesman Rep. Yoon Kwan-suk said.

The splinter People's Party again raised suspicions over a secret deal over the removal of the comfort women statues, also renewing its demand to scrap the 2015 deal.

The Seoul government has long denied agreeing to remove the statues, but has also refused to release the full text of the 2015 agreement, while remarks from many Japanese officials have hinted at such a deal.

On Friday, the Administrative Court of Korea ordered the local government to release all documents related to its 2015 deal with Tokyo. The government said it will decide its next move after first closely reviewing the court ruling.

"The Korea-Japan agreement on comfort women is invalid in that it was signed by the government with no delegated power from the comfort women themselves to do so," the People's Party said in a statement.
(END)