Kim made the remark to reporters upon arrival in Washington for meetings with officials of the incoming U.S. administration, calling for close cooperation between Seoul and Washington in dealing with North Korean threats.

"I am visiting the U.S. as it is important to hold meetings with necessary people ahead of the launch of the new government and have discussions with them so as to maintain close cooperation between Korea and the U.S.," Kim told reporters.

Asked if he is going to meet with Flynn, Kim did not give a direct answer but said Flynn is his "counterpart." Kim also said he is scheduled to hold meetings with other senior Trump administration officials but did not elaborate.

The remark was a thinly veiled threat that Pyongyang is close to developing a nuclear-tipped missile capable of striking the continental U.S., after five underground nuclear blasts and a series of ballistic missile and rocket launches over the past decade.

On the planned deployment of the U.S. THAAD missile defense system in the South, Kim said the deployment should go ahead as planned in an unwavering manner as the system is a defensive measure. Kim said he plans to convey this position to U.S. officials.

Kim's visit also came as historical tensions flared anew between South Korea and Japan over the installation of a girl's statue symbolizing victims of Tokyo's wartime sexual slavery in front of Japan's Consulate in the South.

Japan has demanded the statue be removed, calling it a violation of the 2015 agreement that the two countries reached on resolving the sexual slavery issue. In protest, Tokyo has also recalled its ambassador from Seoul.

Kim said the South intends to abide by the 2015 agreement. 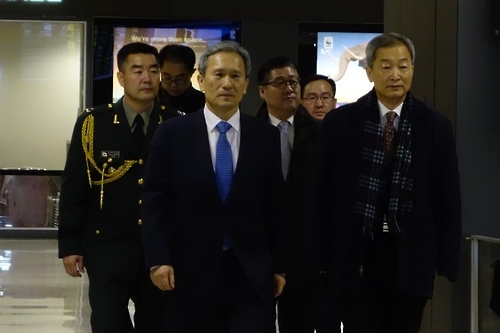