WASHINGTON, Jan. 8 (Yonhap) -- U.S. Defense Secretary Ash Carter vowed Sunday to shoot down any North Korean missile that flies toward the U.S. or its allies.

Carter made the remark in an interview with NBC's "Meet the Press," saying the North's nuclear and missile programs are "a serious threat to us."

"If it were coming, if it were threatening to us, yes. That is, if it's predicted impact or one of our friends or allies, yes, we would shoot it down," Carter said in response to a question whether the U.S. would shoot down a missile test-fired by the North.

Carter, however, ruled out the possibility of interception if a missile is fired into the ocean.

"We only ... would shoot them down, and that is use an interceptive for that purpose, if it was threatening. That is, if it were coming towards our territory or the territory of our friends and allies," he said. 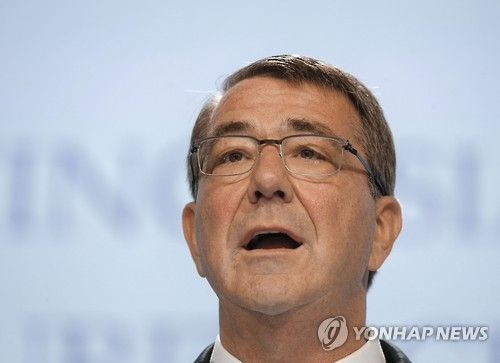 Last week, North Korean leader Kim Jong-un said in his New Year's Day address that the country has reached the final stage of preparation to test-fire an intercontinental ballistic missile.

Asked if he would advocate a pre-emptive strike on the North as he did in 2006 in a joint article with former Defense Secretary William Perry, Carter said, "That was a different circumstance then."

Still, Carter stressed the seriousness of the North's threats.

"Their nuclear weapons and ballistic missile defense programs are a serious threat to us. We try to stay ahead of that, and we are staying ahead of that with our missile defenses to make sure we've upgraded their number, their type, so that we're sure we can defend ourselves," he said.

"We've deployed missile defenses in South Korea, Japan, Guam, and of course, we have 28,500 troops there today, Chuck. And we do every day, their slogan is, "Fight tonight." We're ready to defend the Korean Peninsula and defend our friends and interests there."