SEOUL, Jan. 9 (Yonhap) -- The defense ministry's proposal to repeal military duty exemptions for science and engineering majors has not made any significant progress since it was first introduced in May last year, making it likely that the controversial matter will be tossed to the next administration, officials said Monday.

The ministry had recommended that the special exemptions be aborted to make up for the expected shortage in the number of active-duty manpower due to the declining birthrate. While all able-bodied South Korean men must serve compulsory military duty, those who major in natural sciences or engineering are allowed to replace the duty by working at medium-sized enterprises that require specified skills or at state-designated research institutions. The arrangement is meant to promote the country's R&D and to strengthen science studies, but it has been criticized as a special favor allowing select men to build their academic and work experience.

The defense ministry's proposal was put to discussion, but has not progressed due to conflicting views within the government, according to the officials. While the defense ministry says the exemptions must be repealed to make up for the manpower shortage, the science and education ministries argue that the exemptions have effectively boosted the country's industrial potential and the R&D sector and therefore must be retained. 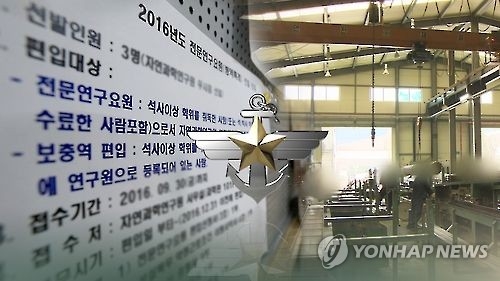 The science ministry cites its survey in which 80 percent of science and engineering graduate students said they will give up advancing to Ph.D. programs if the military duty exemption is repealed. It claims that men will avoid majoring in science and engineering, and that promising students will go abroad instead of staying in the country.

Officials said they have been unable to hold public hearings because of such inter-agency differences.

"We have to be cautious since this is a sensitive issue," a defense ministry official said. "We are not at a stage where we can talk about a schedule of when and how public opinion will be gauged."

Officials say that given the delay, the decision will likely be handed over to the next administration.

"It isn't going to be easy for the defense ministry to actively seek a decision under the current government," an assistant for the parliamentary science committee said. "I have heard that at least this year, there is no plan to change the exemption rule."
(END)