Choi and Chang entered the office, declining to comment on any of the allegations raised against the group.

"The two were called in to bear witness to the case, but their statuses could change to that of suspect in the course of the interrogation," an official on the investigation team said.

On the same day, the probe team summoned Choi Soon-sil, but she declined to appear, saying she needs to prepare for her own trial slated for Wednesday and President Park's impeachment hearing Tuesday.

The Constitutional Court reviewing Park's impeachment designated Choi as a witness to appear at the court Tuesday.

She has rejected previous summons by the investigators, citing health issues.

"We thought those circumstances (about her attending the upcoming trials) could be taken into account," the probe team's spokesman Lee Kyu-chul told a regular press briefing. "We will summon her again after the hearings and see if we need to seek an arrest warrant." 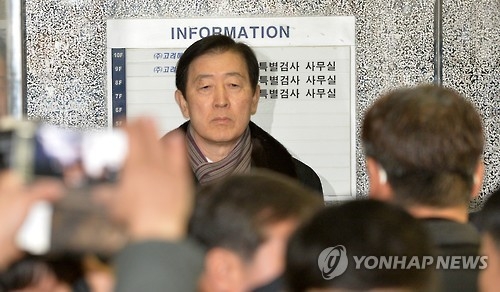