SEOUL, Jan. 9 (Yonhap) -- Over the past month, Hwang Kyo-ahn, an erstwhile low-key premier, has morphed into an assertive -- albeit interim -- leader, as he's struggled with the daunting task of steering the nation gripped by the alledged corruption scandal involving President Park Geun-hye and her friend.

Since Park was impeached over the scandal on Dec. 9, the acting president has swiftly taken control of defense, social and economic policies, and other state affairs despite opposition parties seeking to keep him in check.

Hwang's aggressive engagement in state governance has bolstered his presence in the country's political scene, ranking among potential high-profile presidential contenders -- though he has dismissed the idea of running for president himself.

Hwang will hold power until the Constitutional Court renders its ruling on the highly charged impeachment trial. The court will determine whether to unseat or reinstate Park after a legal review that could last up to six months.

"Since taking over as the acting president, Hwang has apparently been striving to maintain the status quo and prevent the situation, brought on by the scandal, from further worsening," Jun Kye-wan, a political analyst, told Yonhap News Agency.

Upon assuming the leadership role, he first highlighted his mantle as the commander-in-chief, instructing top defense officials to maintain airtight security against seemingly perennial military threats from North Korea.

His focus on security was underscored by his visits to the Seoul-based headquarters of the Joint Chiefs of Staff on Dec. 11 and the South Korea-U.S. Combined Forces Command (CFC) on Dec. 16, and the Army's 25th Infantry Division in Yeoncheon, Gyeonggi Province, on Dec. 26.

"I call on the South Korea-U.S. alliance to closely watch the possibility of any North Korean provocations and be fully prepared to immediately and strongly retaliate if provoked," Hwang said during his visit to the CFC. 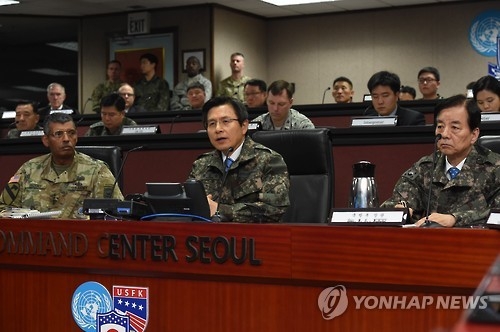 Apart from defense, Hwang placed his top priority on containing avian influenza (AI) which has ravaged poultry farms across the country since mid-November. He has ordered "all-out" quarantine efforts during a daily meeting on AI, which has been held since Dec. 14.

Last week, he said that the outbreak has almost been brought under control, though quarantine authorities have culled more than 30 million poultry.

The acting president even exercised presidential authority for personnel management and appointments, which unnerved opposition parties that argued he should play no more than a caretaker role.

Hwang has said that if necessary, he cannot but press ahead with personnel appointments that would help facilitate efforts to normalize state affairs that have been hamstrung by the impeachment of the president.

In his personnel-related decisions, he retained Yoo Il-ho, the deputy prime minister for economic affairs, who was preparing to leave office after Park tapped Financial Services Commission Chairman Yim Jong-ryong as his replacement.

He also appointed Lee Yang-ho, former head of the Rural Development Administration, to head the Korea Racing Authority, while naming Kim Do-jin, vice president of the management strategy division at the Industrial Bank of Korea as the new chief for the state-run bank.

Hwang, in addition, picked Song Soo-keun, a former senior official at the culture ministry, as the ministry's vice minister -- despite rumors that Song was involved in the alleged blacklisting of cultural figures deemed critical of the government.

Along with the personnel appointments, his push to salvage a series of policy decisions, made by the suspended president, has caused friction with opposition parties.

Hwang has made it clear that the government will push for the planned deployment of a U.S. anti-missile system to South Korea as scheduled despite calls for it to leave the volatile issue to the next government.

He also dismissed calls to renegotiate a 2015 deal between Seoul and Tokyo to settle the thorny issue of Japan's wartime sexual enslavement of Korean woman, saying the deal between two nations must be kept alive and be enforced.

The initiative to publish state-authored history textbooks, however, got bogged down in the face of strong opposition from critics who have said the government must not dictate the way history is written and taught.

His political chops remain doubtful as his relationship with political parties has been shaky. 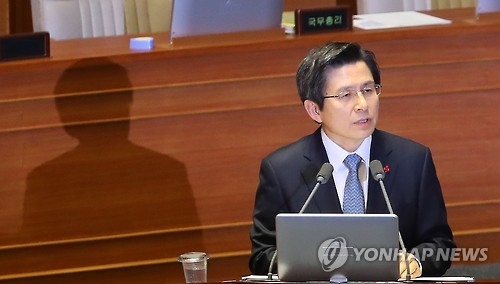 Opposition parties have continued to raise questions over whether Hwang, who has been with the scandal-hit government since its launch in 2013 -- should be allowed to take charge of state affairs. Before taking office as prime minister in 2015, Hwang served as justice minister for more than two years.

Last month, the opposition bloc called for a meeting with Hwang that excludes the ruling Saenuri Party. But the acting president rejected the call and made a counter-proposal to meet chiefs of the ruling and opposition parties one on one.

Despite his difficulty in forging cooperative ties with the political circles, his support ratings stood at 36 percent in a recent survey conducted by local pollster Gallup Korea.