SEOUL, Jan. 9 (Yonhap) -- South Korea's National Assembly handed in a 1,600-page document to the Constitutional Court on Monday, supporting its argument that President Park Geun-hye's whereabouts during the sinking of a ferry in 2014 also establish legal grounds for her impeachment.

The Sewol ferry, which sunk in 2014, claimed more than 300 lives, most of whom were high school students on a field trip. Opposition parties have been claiming that Park failed to properly handle the disaster, adding that more lives could have been saved if she had done her role.

On the impeachment motion passed in December, opposition lawmakers cited the Constitution article that stipulates the government must make efforts to protect the people from disasters as backing for this.

While the government claims Park remained alert to the disaster on that day, her whereabouts still remain controversial. The so-called "missing seven hours" have been rocking the political realm, with the opposition bloc casting various suspicions.

Some conservatives who have backed Park's position objected to the issue being linked to the president in the first place by claiming she could have done nothing to save more lives under the circumstances.

"(The document) includes legal principles (related to the impeachment) and facts surrounding the sinking," the parliament's attorney said.

The Constitutional Court currently reviewing the legitimacy of the impeachment earlier demanded Park hand in her detailed whereabouts last month. The president's representatives are expected to submit related documents later this week. 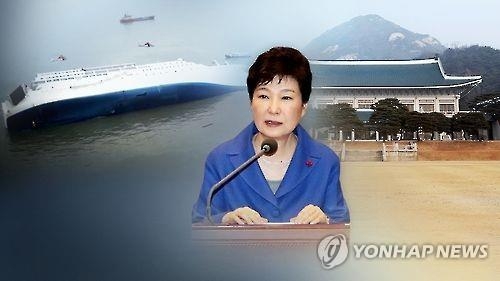