SEOUL, Jan. 9 (Yonhap) -- The Japanese ambassador and consul general in South Korea returned to Tokyo on Monday as a diplomatic row deepened over a recently erected statue that condemns Japan's wartime atrocities.

Ambassador Yasumasa Nagamine boarded a flight to Japan at Gimpo International Airport, in western Seoul, earlier in the day in a gesture of protest over the recent installation of the statue.

The envoy called the statue "very regrettable" in a brief meeting with South Korean reporters before boarding the flight. In Japan, he will focus on consultations with Japanese officials, the ambassador said.

Before Nagamine, Japanese Consul General Yasuhiro Morimoto based in the port city of Busan returned to Tokyo via Gimhae International Airport, according to sources. 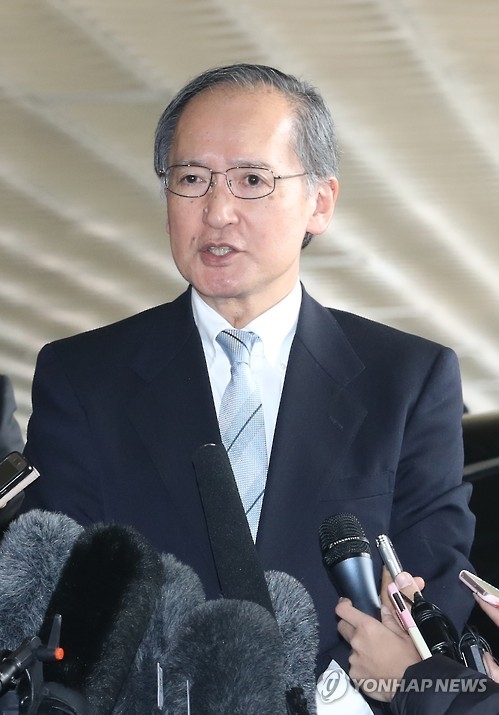 On Friday, Japan announced the plan to recall its diplomats "temporarily," a decision which came a week after a civic group erected the statue of a girl symbolizing South Korean women sexually enslaved by Japanese forces during World War II in front of the Japanese Consulate General building in Busan.

Japan has protested the erection of the statue as a violation of the deal it signed with South Korea in December 2015 to settle the so-called comfort women issue.

Following the deal, Japan has repeatedly demanded the removal of another statue in front of the Japanese Embassy in Seoul, but South Korea has said the fate of the civic group-erected statue is beyond the government's authority.

As the bilateral row deepened, Tokyo on Friday also announced a halt to ongoing negotiations on a currency swap agreement with South Korea and called off a high-level economic cooperation meeting.

Observers said the absence of the Japanese diplomats is likely to be short-lived although the date of their return to South Korea depends on future developments on the diplomatic front.

The 2015 deal was designed to end the neighbors' long-running feuds over the history issue once and for all. Under the agreement, Japan injected 1 billion yen (US$8.5 million) to a South Korean foundation aimed at supporting South Korean sex slavery victims, also known as comfort women.

Historians estimate that up to 200,000 women, mostly from Korea, were forced to work at front-line brothels for Japanese forces while the Korean Peninsula was under Japan's colonial control from 1910-45.

On the same day, Foreign Minister Yun Byung-se also called in Nagamine to convey disappointment over the Japanese action.

Locally, the so-called comfort women agreement has been publically criticized for not doing enough to build consensus from surviving victims, as well as not getting an official acknowledgment and apology for the wartime atrocity.

Key opposition presidential hopefuls, including Moon Jae-in, hinted at the possibility of renegotiating the deal.