The move came as the interim head, requested that loyalists leave the party by last week as a sign of taking responsibility for the alleged influence-peddling scandal which resulted in Park's impeachment in December. The so-called purge of loyalists mainly targeted the eight-term lawmaker.

The tension deepened as the two called each other names, with Suh calling the interim head, who also served as a preacher, a "false clergyman." In shot back by comparing Saenuri to a "church with Suh as a deacon."

Suh said forcing lawmakers to leave is a clear breach of the party rules and defamation of members.

"Forcing withdrawal is obstructing the exercise of rights of lawmakers, which establishes coercion as an offense under the criminal law," Suh said, adding In also sought to obstruct normal operation of the party by abusing his authority.

Suh said In also violated the freedom to assemble, join and leave parties, which can also be considered violations of human rights.

The lawmaker said he also regrets tapping the "left-leaning" priest as the party's interim head.

Saenuri has been suffering from a second round of feuds, after a group of lawmakers left last month to establish the tentatively named Righteous Party, which will officially launch later this month. 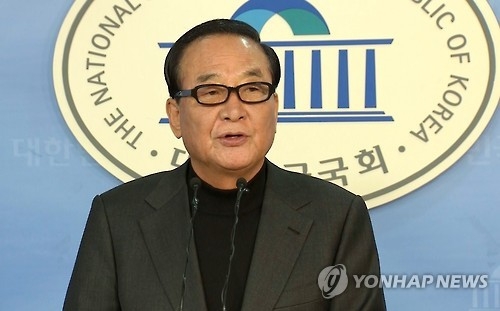