According to the data from the Korea Automobile Manufacturers Association (KAMA), five South Korea-based automakers produced a combined total of 4,228,536 vehicles in 2016, down 7.2 percent from 4,555,957 units the previous year.

The drop was largely attributed to missed production suffered by the leading automaker Hyundai Motor Co. and its smaller affiliate Kia Motors Corp. due to a series of walkouts staged by their own unionized workers over wage negotiations.

The two largest carmakers here also have 12 other overseas facilities in nine countries, including the United States and China, that helped prevent their global sales from plunging.

Still, their combined sales dipped 1.7 percent on-year to some 7.88 million cars last year, apparently due to the missed production they suffered here at their local facilities. 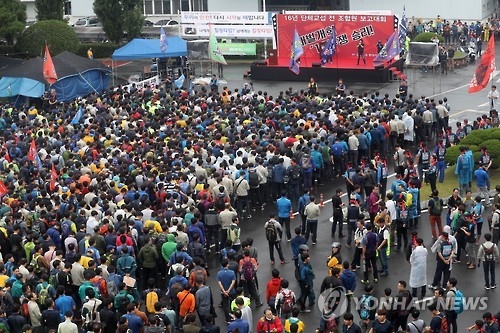 GM Korea Co., the South Korean unit of U.S. automaker General Motors Co., also had its local output shrink 5.7 percent on-year to 579,745 mostly due to a sharp drop in exports caused by GM's decision two years ago to withdraw Chevrolet vehicles from most European markets.

With a 7.2 percent on-year drop, South Korea was ranked the world's sixth-largest in terms of auto output in 2016, down from the fifth spot a year earlier.

China, also the world's single largest market for automobiles, continued to produce the largest number of cars, followed by the United States, Japan and Germany.

India moved up a notch from a year earlier with some 4.5 million cars estimated to have been produced there last year, according to KAMA.