SEOUL, Jan. 9 (Yonhap) -- Acting President and Prime Minister Hwang Kyo-ahn on Monday reiterated the government's commitment to create new jobs and enhance the welfare system this year, as he seeks to stabilize the livelihoods of average citizens amid a prolonged economic slowdown.

During the New Year's policy briefing on social and welfare issues, Hwang called for greater policy attention to a set of economic and demographic challenges such as the high youth unemployment rate and the low fertility problem.

"We are at a time when we have to pay more attention and make more efforts to stabilize the livelihoods of citizens given that the more (economic) conditions deteriorate, the tougher the lives of ordinary citizens become," Hwang said. 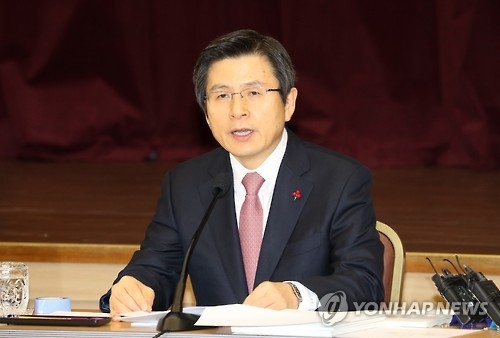 To address what he calls the employment crisis, he stressed the need to quickly execute this year's budget for job creation -- worth 17 trillion won (US$14 billion) -- and expand tailored services to help job seekers from low-income families.

The acting president also encouraged the public sector to lead efforts to create jobs and underscored the importance of forging a "merit-based society" in a departure from the one that unduly cares about one's economic background.

Since last week, Hwang has been receiving policy briefings from government ministries and agencies. He took over as acting president on Dec. 9 after President Park Geun-hye was impeached over a corruption scandal.

During the briefing, Hwang also pledged to reduce "blind spots" in the welfare system, saying that the country must expand welfare services that could directly benefit citizens in need.

He, in particular, called on top policymakers to strengthen educational services to students from multicultural families, those physically challenged and young defectors from North Korea.

Hwang, in addition, instructed related ministries to find viable measures to support young adults undecided on getting married or having children due to financial and other problems.

"Our country has failed to escape from the trap of the low birth rate for the past 15 years," he said. "It is more important than anything else to forge an environment in which young adults can freely form a family and have a child should the country seek to shore up its fertility rate as countries like France and Sweden have done."

Meanwhile, Hwang called on public servants to be more attentive to citizen voices and remain focused on faithfully carrying out their duties, particularly when the country faces a plethora of challenges at home and abroad, including Pyongyang's military threats and regional geopolitical tensions.

"Under the current grave circumstances, you, public servants, should pay more careful attention to people's voices to better support their livelihoods and ensure that various endeavors to prepare for the future will never waver," Hwang said during a luncheon meeting with 105 upstanding public servants in Sejong, 121 kilometers south of Seoul.

He also pledged to take a series of measures to boost morale among public servants, such as expanding overseas educational programs. 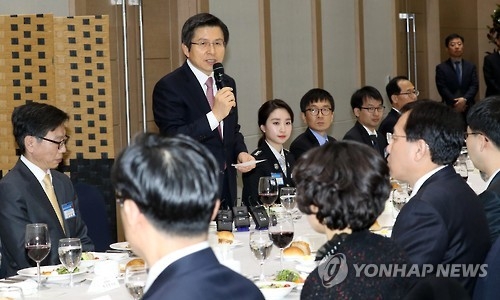