As part of a scheduled rotational deployment, the 24 AH-64D Apache heavy attack helicopters will gradually replace the 30 OH-58D Kiowa Warrior observation and light attack choppers by early February, the USFK and the Ministry of National Defense said in a joint statement.

"The Apache helicopter battalion will be stationed at Camp Humphreys, and part of the unit will be temporarily deployed to Suwon Air Base until the new aircraft parking apron is complete at CP Humphreys (in Pyeongtaek, 70 kilometers south of Seoul)," U.S. Army Col. Rob Manning said in a press briefing held at the ministry's headquarters in Seoul.

Initially, eight Apache helicopters will be deployed to Camp Humphreys and 16 Apache choppers will be sent to Suwon Air Base from Wednesday to Friday. When the construction work is finished at Camp Humphreys in October, the eight Apaches will be relocated to Pyeongtaek, Kim Sung-min, director of the U.S. policy division at the ministry, said in the briefing. 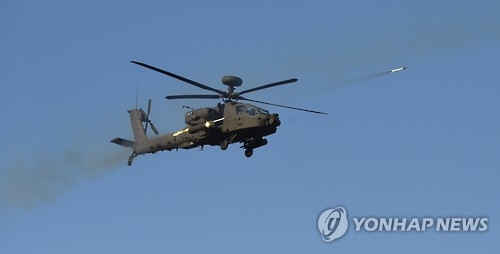 Some 360 U.S. soldiers are expected to come with the Apache battalion by early February and they are to replace a similar number of U.S. troops who belong to the OH-58D battalion, Kim said.

"The rotational deployment of the Apache helicopters is a demonstration of strong U.S. will in implementing its security commitments and will significantly strengthen the ROK-U.S. combined defense posture and capabilities," Manning said.

The Apache helicopters are capable of striking tanks, air-cushion vehicles and special operation units in North Korea, the director said.

The replacement of the existing helicopters with more capable machines reflects the worsening security situation on the Korean Peninsula as the communist state continues to step up saber-rattling.

On Sunday, North Korean leader Kim Jong-un threatened to test-launch an intercontinental ballistic missile at any time from any place of its choosing. Immediately after the verbal threat, the U.S. said it is fully capable of defending against North Korean missiles.

24 Apache helicopters to be deployed in S. Korea by Feb

24 Apache helicopters to be deployed in S. Korea by Feb