While the so-called over-the-top content (OTT) broadcasting, which delivers video and other content via the Internet, is growing, some analysts say there is a long way to go before people embrace paid Internet broadcasting services.

The nation's three mobile carriers -- SK Telecom, KT and LG Uplus -- and Internet portals have offered Internet-based TV broadcasting, but only 4.7 percent of viewers subscribed to a paid service, according to data by the Korea Communications Commission. 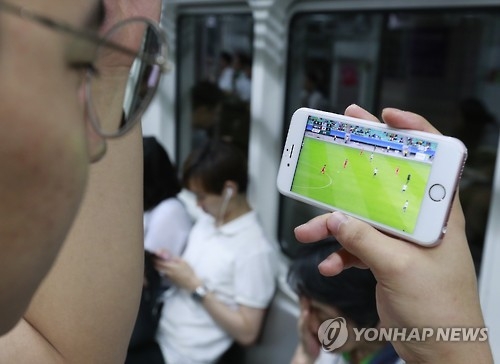 However, the data showed that people are increasingly using their smartphones to watch TV.

In a survey by the commission of 7,385 people, unveiled late last year, 27.1 percent of the respondents said they used the OTT service.

In comparison, a 2015 survey showed that 14 percent used the OTT service.

Revenues for the Korean market for web-based broadcasting stood at 317.8 billion won (US$263.8 million) last year.

This year, the market is expected to jump 53.7 percent to 488.4 billion won, according to the commission's report.

Paid web-based broadcasting services, run by KT, SK Telecom and LG Uplus, each accounted for about 1 percent of the total market, according to the data.

To increase their subscriber bases, companies have offered free services.

CJ E&M has provided a free live-streaming service of its 153 TV channels since last Tuesday.

Pooq, a TV app that broadcasts TV dramas and shows, is also expanding the scope of its free on-demand video streaming services.