The plan came as Seoul is seeking to strengthen its alliance with Washington amid a string of diplomatic and security challenges such as Beijing's apparent retaliation about the planned deployment of a U.S. anti-missile system to the peninsula and a reignited row with Tokyo over Japan's wartime sexual slavery issue, not to mention North Korea's escalating military threats.

"In line with customary practices, we plan to send a congratulatory message to President-elect Donald Trump," the source with knowledge of the matter told Yonhap News Agency over the phone, declining to be named.

His message to Trump is to be delivered around Jan. 20 when the new U.S. administration takes office.

Since Hwang took over as acting president on Dec. 9 after President Park Geun-hye was impeached over a corruption scandal, he has stressed the need to strengthen communication and cooperation with the incoming Republican government.

In his message, Hwang is expected to strengthen joint efforts to counter Pyongyang's evolving nuclear and missile threats.

In the nationally televised address on New Year's day, North Korean leader Kim Jong-un made a veiled threat that Pyongyang is close to mastering the technology for an intercontinental ballistic missile (ICBM) capable of reaching the U.S. mainland. Pyongyang also said it can test-fire an ICBM "at any time and any place."

Seoul has sought to get off to a good start with the new Washington government amid concerns about policy shifts under Trump's presidency.

On the stump, the real-estate mogul has belittled the South Korea-U.S. free trade agreement as a "job-killing" pact, while stressing the need for key American allies such as South Korea and Japan to pay more for the upkeep of U.S. troops on their soil. 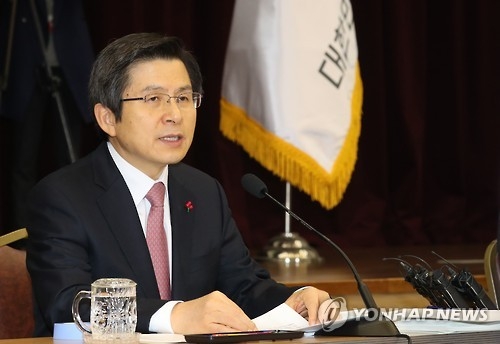