SEOUL, Jan. 10 (Yonhap) -- Ken Eom, a 37-year-old North Korean defector, by chance read a military booklet about two decades ago in North Korea which dictates how to speak English when confronting soldiers from the United States, Pyongyang's main enemy.

The small book that he browsed through out of curiosity was full of short English sentences -- "Hands up!" and "What's your name? -– which could be used by North Korean servicemen in combat situations with the U.S.

"I came to know that some units of the North Korean military learn English expressions for combat use. Even in schools, English is being used as a tool to instill North Korea's ideology and anti-capitalism," said Eom, who defected to South Korea in 2010.

"But here in the South, I am learning it to better assimilate into the competition-heated society," he added.

Eom is among many North Korean defectors who are eager to study English in South Korea where getting higher scores on English tests helps people enter prestigious universities or land good jobs.

There is a free English program, named "Teach North Korean Refugees (TNKR)," which aims to help North Korean defectors such as Eom learn English in a tailored manner.

"This is not a program that we are going to say we will teach you this or that. This is a program where you (can) develop your interest and you identify what that is," said Casey Lartigue, co-founder of the Teach North Korean Refugees Global Education Center. "And you have tutors who are there to help you develop." 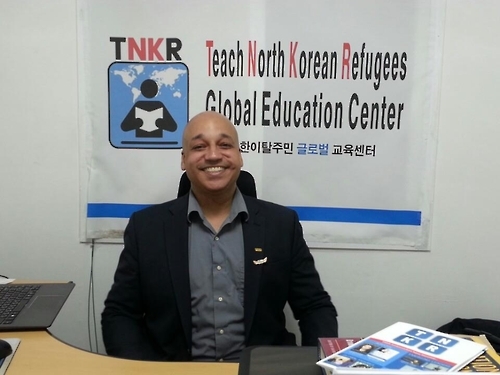 Lartigue, an American, said he began to think about how to better support defectors after seeing a hunger strike in 2012 by former lawmaker Park Sun-young who opposed China's forceful repatriation of North Korean refugees.

That year, he met with Lee Eun-koo, a former researcher at the Korean Educational Development Institute, at a conference on human rights.

After exchanging ideas on how to help defectors, they jointly launched the TNKR program in March 2013, which matches North Korean refugees with volunteer English tutors.

Around 30,000 North Koreans have come to South Korea in search of freedom, but many are struggling to adapt to the capitalist South. Learning English is cited as a nagging challenge for many defectors here.

More than 41 percent of 322 defectors picked communication problems stemming from frequent use of foreign languages as the biggest difficulty for social assimilation, according to a 2014 poll by Seoul's unification ministry.

South and North Korea speak the same Korean language, but the gap between their daily use of words has grown since they were divided about 70 years ago and there has been an influx of foreign languages into the South.

Lartigue said what sets TNKR apart from other English teaching programs for defectors lies in letting students have autonomy in deciding what to study and their own learning goals.

The program allows students to choose their own teachers and receive one-on-one tutoring which could best suit their learning purposes, he stressed. 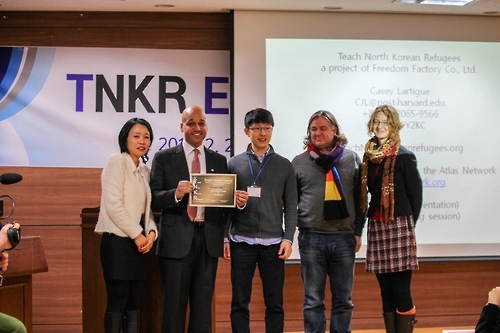 About 250 North Korean defectors have so far learned English through the TNKR program with more than 490 volunteers having devoted their time to teaching, according to the center. Around 70 refugees are also on a waiting list to join.

Among the students was Park Yeon-mi, a 23-year-old North Korean defector who delivered an emotional speech about North Korea's appalling human rights abuses during the One Young World Summit held in Dublin in 2014.

Lartigue pointed out the example of defector Park Eun-hee, who first hesitated to even say her name but slowly began to open up and learn how to express herself through the program.

He said TNKR volunteers do not ask about their students' experiences in North Korea or their backgrounds and just focus on assisting them under the goal of "look forward, not back."

"She (Park) said she went through a transformation (because of TNKR). She is no longer embarrassed about (the fact) she is from North Korea," he said. "Somehow, she felt free to be just her own person."

For English-speaking tutors, they have a chance to better understand North Korean defectors and thereby lift their prejudices against refugees, Lartigue added.

A South Korean tutor, who only gave her surname Ha, said that she felt surprised how "exuberant" her defector students are, realizing that they are no different from South Koreans.

"I think I want to give them a friendly impression of South Korea. I'd like to let them know even though either North or South Korea can be a difficult place to live, there are always people who are willing to help others," she said. 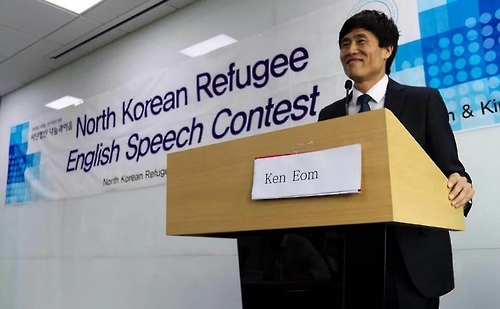 North Korean defector Eom said he would like to improve his English proficiency to have a competitive edge in South Korea.

"Based on this, I want to help other defectors overcome difficulties due to social prejudice and English," he said. "If chances arise, I hope to contribute to the process to craft policy for refugees after finishing graduate school."

Lartigue expressed hope that more Koreans could have an interest in supporting North Korean defectors and make donations to the TNKR program to help provide more suitable environments for students.

"Come to us if you want to improve your English. This is a great opportunity for you to find own you way and to tell your own story.... We are really trying to make our program that they (defectors) are in charge and they can use it to the best of their benefit," he added.