SEOUL, Jan. 9 (Yonhap) -- Seoul Mayor Park Won-soon, a potential contender in the next presidential race, said Monday the main opposition Democratic Party's steps to prepare rules for the primary is a hasty move, while expressing concern over the pro-Moon Jae-in faction's dominance over party affairs.

"The people are focusing on the ouster (of President Park Geun-hye). It is doubtful whether it is right to officially (discuss) the primary rules at the break of the new year, even when the people still distrust the political realm," Park said during an interview with Yonhap News Agency.

"Although there must be working-level preparation and discussions as the campaign period is short, the party head's vow to fix primary rules at an early stage goes against the sentiment and will of the people," Park added. 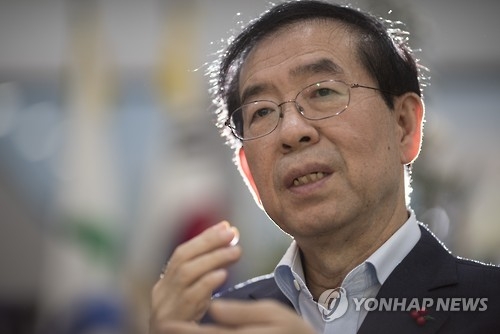 The president was impeached by the parliament in December with the Constitutional Court currently reviewing the legitimacy. If approved, South Korea has 60 days to pick a new leader.

The Seoul mayor, also a liberal Democratic Party member, has been falling far behind the former party head Moon in opinion polls.

Park also said the primary must be done in a "vibrant" manner, apparently casting concern over the dominant lead of Moon.

"Even in the past, there were some situations with unexpected changes, as front-runners acted like they were already the president, which led to the mistrust of the people," Park said.

"The people want drama from politics. Leaders staying as leaders cannot be drama. Starting with a low (approval rating) and coming from behind is drama," the mayor said.

Park said the hegemony and exclusiveness of the pro-Moon faction may result in various side effects and emerge as a drag on the party.

The mayor said he plans to join the primary and be selected as the presidential candidate from the Democratic Party.

"I will demand fair primary rules, and win the party ticket to become president. That is the only future and path I am thinking of," Park said.

According to the poll conducted by Real Meter last week, Moon posted an approval rating of 26.8 percent as a potential presidential candidate, trailed by former U.N. Secretary-General Ban Ki-moon with 21.5 percent.

Seongnam Mayor Lee Jae-myung followed with 12 percent. Park, who was considered a major contender, managed to post 4.3 percent in the poll.

"Ban's failure to achieve any progress in the inter-Korean relationship indicates he is either incapable, or has no willingness," Park added.

The mayor said he is also better than Moon in terms of seeking harmony among the opposition bloc. Moon although leading in the polls has not been very good in winning support from all followers who want a liberal administration in office.