NH Investment & Securities Co., the No. 2 brokerage firm here by capital base, will open the NH Finance Plus finance center this week in Samsung-dong, located in the affluent Gangnam area, south of the Han River.

NH has consolidated three smaller branches in nearby districts to open the center with more than 70 workers.

It is designed to provide customers with comprehensive services, including asset management and investment support, as well as legal, tax and real estate consultations.

The move is intended to cut costs and raise the efficiency of services amid fierce competition among local brokerage firms.

In addition, a growing number of investors are shifting to online trading from offline platforms.

"Rent is especially high in Seoul's Gangnam and downtown districts (in the capital), but there are many branches there packed together," said Kim Jae-joon, a senior NH official. "Those areas need larger-sized branches." 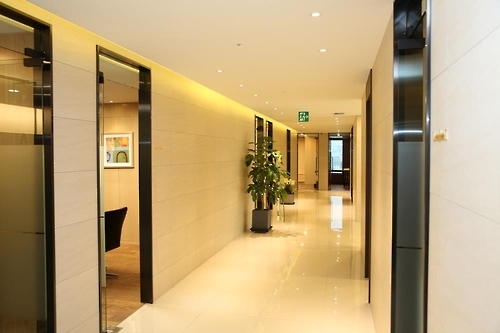 Samsung Securities Co., South Korea's fourth-largest brokerage firm, has also stepped up efforts for larger-sized "finance centers" in Seoul, each of which has up to 100 workers, far more than around 10 at traditional and small branches.

The centers boast facilities for one-on-one consultation services and seminars on various scales.

Mirae Asset Daewoo Co., the leading securities firm, plans to open "Investment Wealth-Management Centers" (IWCs) in Seoul and some other big cities nationwide, such as Daejeon, Daegu, Busan and Gwangju.