SEOUL, Jan. 9 (Yonhap) -- The leads for the Korean action film "Fabricated City" met with the press on Monday to discuss their upcoming movie, which will premiere next month.

Actors Ji Chang-wook, Shim Eun-kyung and Ahn Jae-hong held an exclusive press conference at CGV-Apgujeong in southern Seoul, where they participated in a series of photo ops and interviews to promote the highly anticipated action thriller.

In the new film, Ji plays Gwon-yu, a jobless young gamer who is jailed after being framed for murder but struggles to unearth the truth with help from other members of his online gaming team. This marks his silver screen debut. Actress Shim Eun-kyung of the 2013 box office hit "Miss Granny" and actor Ahn Jae-hong of the popular television series "Reply 1988" play the two other gamers named Yeowul and Demolition.

"Fabricated City" was spearheaded by directed by Park Kwang-hyun, who also took the reins for the 2005 hit movie "Welcome to Dongmakgol." 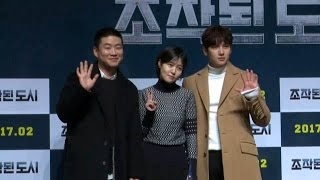