WASHINGTON, Jan. 9 (Yonhap) -- Shooting down North Korea's intercontinental ballistic missiles over international waters is one of the ways to disrupt their ICBM tests that the U.S. should consider if new negotiations with Pyongyang break down, former Defense Secretary William Perry said Monday.

During a discussion in Washington, Perry stressed that the U.S. can no longer afford doing nothing about the worsening problem of the North's nuclear and missile programs and must give diplomacy the first chance to limit Pyongyang's capabilities.

He said that disrupting the North's ICBM tests is important in preventing the regime from perfecting ICBM capabilities, and should be one of the measures that the U.S. should take under "Plan B" after negotiations with Pyongyang break off. 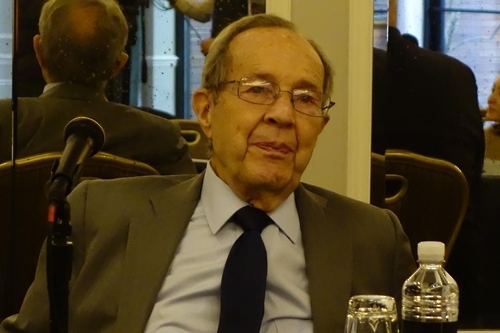 Perry, known for his call in 2006 for a preemptive strike on the North's missile site in a joint op-ed piece with Secretary of State Ash Carter, said, however, that he no longer recommend bombing the North's launch site because it would be "too dangerous to South Korea."

"The most obvious way is simply shooting them down over international waters, but they are other ways of doing that as well. I would leave that up to the military to decide. The goal would be disrupting the tests and disrupting the least political impact," Perry said when asked to elaborate on ways to disrupt the North's ICBM tests.

ICBMs should go through complete testing before deployment to make sure everything works, including the difficult challenge of designing a re-entry vehicle that is capable of withstanding the extreme heat generated when the craft comes back into Earth's atmosphere, Perry said.

"I think disrupting tests is a pretty effective way of stopping their ICBM program," he said during the discussion organized by 38 North, a website specializing in North Korean affairs.

Last week, North Korean leader Kim Jong-un said in his New Year's Day address that the country has reached the final stage of preparation to test-fire an intercontinental ballistic missile. It represented a thinly veiled threat that Pyongyang is close to developing a nuclear-tipped missile capable of striking the continental U.S.

In Washington, Defense Secretary Ash Carter said later Sunday that the U.S. will "shoot it down" if a North Korean ICBM "were coming towards our territory or the territory of our friends and allies."

On Monday, Perry also recommended three other measures that can be take in the event of a failure negotiations: significantly increasing sanctions on Pyongyang, strengthening missile defense forces in South Korea and Japan and increasing the American military presence in South Korea, including the consideration of redeploying nuclear weapons.

"I've never been a fan of deploying nuclear weapons in South Korea and I'm not today," he said. "They are not necessary to defend South Korea. We can do it with the other nuclear weapons we have, both land-based, sea-based, but maybe necessary, though, as they give the South Korean people the confidence that their nuclear deterrence is there. So therefore, in this case if negotiations completely break down, I would consider that as an alternative."

Perry called for resuming negotiations with the North with the goals of a deal that puts a moratorium on nuclear and missile tests by the North as well as commits the regime not to sell or transfer its nuclear technology beyond its borders.

That agreement could serve as a basis for moving toward a nuclear-free Korean Peninsula, he said.

"We cannot do nothing. The time for patience is over because time is really not on our side," he said.

In a recent op-ed piece in the Washington Post, Perry made a similar warning.

"Time is of the essence. If we don’t find a way — and soon — to freeze North Korea’s quest for a nuclear ICBM, this crisis could all too easily spin out of control, leading to a second Korean War, far more devastating than the first." he said.