Outbound shipments of vehicles came to 2.62 million units for last year, down from 2.97 million vehicles tallied a year earlier, according to the Ministry of Trade, Industry and Energy.

"A drop in global demand, partial strikes at major carmakers and increasing overseas production dragged down the country's exports last year," the ministry said in a release.

Total output by Hyundai Motor and four other companies tumbled 7.2 percent on-year in 2016 to 4.23 million units due to faltering exports and strikes.

A total of 1.83 million vehicles, including imported cars, were sold in South Korea last year, down 0.4 percent from a year earlier amid a protracted economic slowdown. 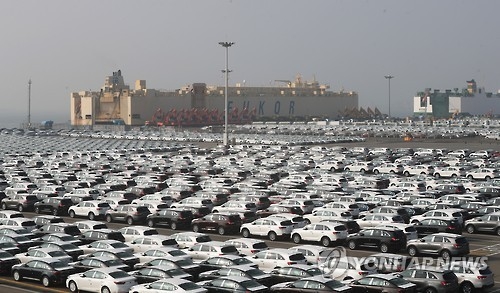