SEOUL, Jan. 10 (Yonhap) -- South Korea's parliament has taken its first step to lower the minimum age to vote by a year to 18 on Tuesday, with the conservative bloc becoming more open to the change though it may better benefit liberals.

Both ruling and opposition parties unanimously approved a bill for the revision at a sub-committee of the National Assembly's Security and Public Administration Committee on Monday. It will be deliberated by the committee and then must be passed by the judiciary committee before being put to a parliamentary plenary vote.

South Korea may hold an early presidential election, which originally is scheduled for December 2017, if the Constitutional Court upholds the parliamentary impeachment of President Park Geun-hye.

If the age change is implemented, it would increase the number of eligible voters by some 610,000, which could play a decisive role in the upcoming election which is widely expected to be a tight race.

Conservative politicians were initially averse to the proposal, as younger voters are usually supportive of progressive parties. Pundits, however, believe their position may change, especially as the amendment may not do much harm to conservatives if the election is held earlier.

"If we assume the election takes place in the first half of the year, a smaller number of South Koreans will turn 18. The ruling bloc does not have much reason to oppose, unlike under the scenario of a December election," a ruling Saenuri Party lawmaker said.

A splinter conservative party to be launched by former Saenuri members this month has been reviewing the revision as one of its key policy goals, in an apparent bid to display its relatively progressive stance compared to Saenuri.

Saenuri also appears set to embrace relatively liberal-leaning policies under a new leadership led by In Myung-jin, who vowed to purge the ultra-rightists loyal to President Park.

The Constitutional Court is currently examining the validity of Park's impeachment. If the top court gives the nod, the country will have 60 days to pick a new leader. 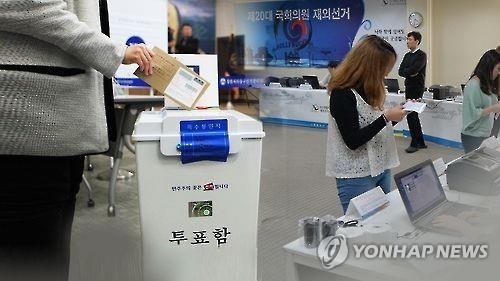