SEJONG, Jan. 10 (Yonhap) -- Prices of car fuel rose in December for the first time in 41 months, pushed by the rise in international prices, statistics showed Tuesday.

The price of gasoline rose 1.4 percent on-year last month, and that of diesel 2.8 percent. It marks the first such increase for both since July 2013, according to Statistics Korea.

The price of gasoline in Seoul has already exceeded 1,600 won as of Monday.

Last month's price pivot is in step with the rise in international prices after OPEC in September agreed to slash production with non-members Russia and Mexico deciding to participate in the move.

Brent crude futures registered at $57.10 per barrel, and West Texas Instrument futures at $53.99. 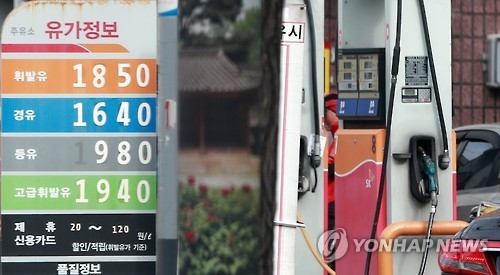