SEOUL, Jan. 10 (Yonhap) -- A Chinese sport utility vehicle, the Kenbo 600, will be launched in South Korea next week, becoming the first-ever Chinese passenger vehicle to be marketed here, the local importer of the car said Tuesday.

China-Korea Motor Co., the local importer and distributor of the Chinese vehicle, plans to unveil the Kenbo 600 in a ceremony to be held at its Incheon headquarters next Wednesday.

The Kenbo 600, marketed as the S6 in China, is a SUV produced by BAIC Motor Corp., the passenger car making unit of China's state-owned BAIC Group, the fourth-largest automotive group in China by output.

The local importer of the Chinese vehicles is already taking pre-orders, with deliveries set to begin at the start of next month, a company official said. 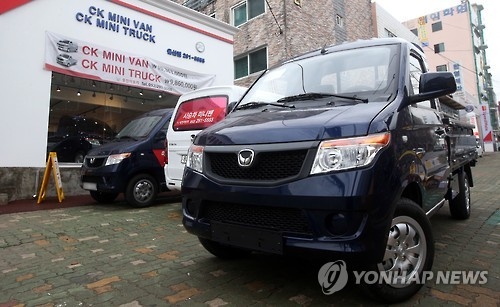 Chinese SUV to be launched in S. Korea next week

Chinese SUV to be launched in S. Korea next week