SEOUL, Jan. 10 (Yonhap) -- Acting President and Prime Minister Hwang Kyo-ahn said Tuesday the South Korea-Japan agreement clinched in 2015 on settlement of the enslavement of Korean women by Japan during World War II should be respected.

"(South Koreans) should refrain from making remarks or actions that can worsen the situation surrounding the sexual enslavement issue," Hwang said during a Cabinet meeting.

South Korea and Japan reached a deal in December 2015, where Tokyo agreed to provide 1 billion yen (US$8.62 million) for the creation of a foundation aimed at supporting the sexual slavery victims, euphemistically called comfort women during its colonial rule of the Korean Peninsula.

The acting president said the agreement was aimed at recovering the honor of the victims, and that Japan acknowledged its responsibility. He also claimed that the pact aims to lay the base for a future-oriented relationship between Seoul and Tokyo

The opposition parties, as well as some of the victims, however, claim the agreement was made too hastily and without receiving consent from the victims. Opponents claimed Japan has not expressed a clear stance or apology on its role in the sexual enslavement of women.

Tokyo, meanwhile, recalled its top envoys to South Korea and suspended bilateral currency swap negotiations last week in protest of a civic group's installation of a statue symbolizing the "comfort women" in front of its Consulate General office in the southern port city of Busan. 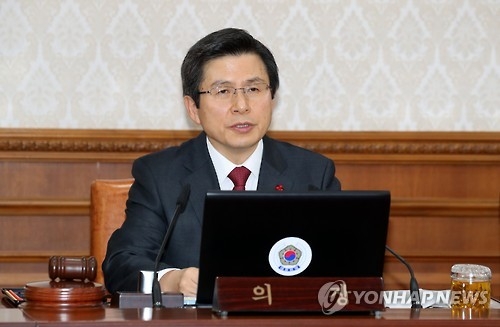