SEOUL, Jan. 10 (Yonhap) -- South Korea has recently created a graphic poster which sums up sanctions imposed on North Korea and the devastating effects they have had on the communist country, officials said Tuesday. Seoul plans to use the poster to ramp up cooperation with the incoming Trump administration in pressuring Pyongyang.

The poster uses colors, graphs and short captions to show in one glance the North Korean industrial sectors that have been slapped with United Nations Security Council sanctions and the damage the sanctions have inflicted, the officials said.

According to the contents, North Korea has suffered a foreign currency loss of US$200 million as of the end of 2016, with the imposition of UNSC Resolution 2270. The country is likely to face an additional foreign income loss of $800 million annually as result of Resolution 2321.

Resolution 2270 was adopted in March last year as punishment for North Korea's fourth nuclear test two months prior to that. In September, the North conducted another nuclear test, which led to the introduction of UNSC Resolution 2321 in November. North Korea's foreign income sources, including coal exports, were targeted in the resolutions.

The poster also shows the effect of the UNSC sanctions on North Korea's labor export and air carrier service, as well as shipping industry.

The officials said Seoul has recently provided copies to the Obama administration in a gesture to mark the teamwork the countries have shown in their joint diplomatic efforts for the UNSC actions. The South Korean government also plans to use the poster on the diplomatic front to showcase to the incoming Trump administration the importance of North Korean sanctions.

President-elect Donald Trump said on Twitter a week earlier that "North Korea just stated that it is in the final stages of developing a nuclear weapon capable of reaching parts of the U.S. It won't happen!"

It was Trump's first official mention of the North Korean nuclear issue which hints at Washington's continued hard-line policy line toward the country's nuclear weapons ambition. 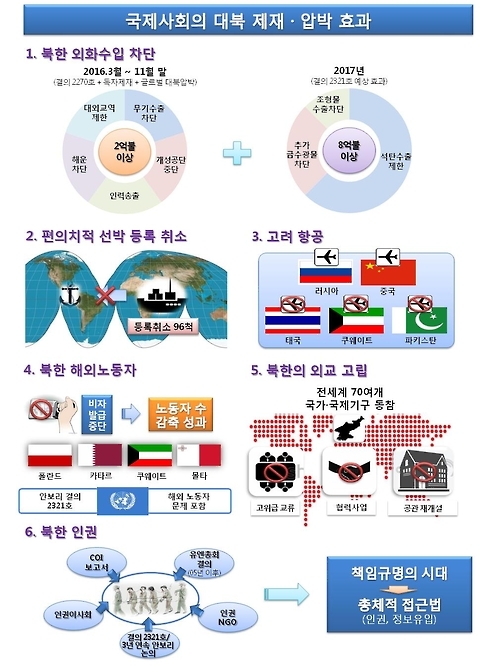