SEOUL, Jan. 10 (Yonhap) -- North Korean leader Kim Jong-un's public activity has been on the decline since 2013 as he is seen to have established his power base, reducing the need to show his presence publicly, a Seoul government official said Tuesday.

The North's leader conducted public activities on 132 occasions in 2016, down 14 percent from the previous year, according to the data compiled by South Korea's unification ministry.

The 2016 figure marked the lowest since he took office in late 2011 following the sudden death of his father Kim Jong-il.

In 2012, he made on-site inspections and other public appearances on 151 occasions, but since 2013, the frequency of his public activities has been on the decline.

"In his early years in office, Kim seemed to make more public activities to promote his image (as a new leader). But as he has consolidated his power, the need for such activities has fallen," a ministry official said. 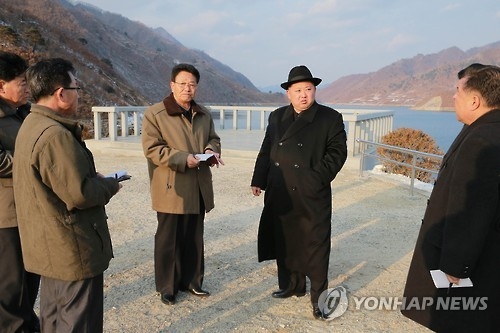 Last year, Kim's inspection of the military and defense sectors made up for the largest portion of his public activities.

The North Korean leader's on-spot tours to the military and defense sectors accounted for 35.6 percent of his total last year, compared with 30.1 percent a year earlier, the data showed.

In 2016, the portion of his public activity in the economic field made up for 37.1 percent, down from 45.8 percent tallied for the previous year, it showed.

In the first quarter of last year, he mainly conducted inspections of the military sector, but since April, his focus has shifted to the economy as the international community implemented tougher sanctions.