SEOUL, Jan. 10 (Yonhap) -- Prices of fresh groceries and other daily necessities have jumped in recent months despite the prolonged economic slowdown, sparking concerns over whether South Korea could face stagflation.

The nationwide average retail price of cabbage came to 5,578 won (US$4) as of Friday, compared with 2,630 won, the average price for the past five years. The average retail prices of a white radish and one kilogram of carrots jumped to 3,096 won and 6,026 won, respectively, up 137.6 percent and 123.8 percent during the same period.

South Korea has slaughtered more than more than 30 million poultry, including chickens, to try to contain bird flu, a move that has pushed up local prices of eggs. 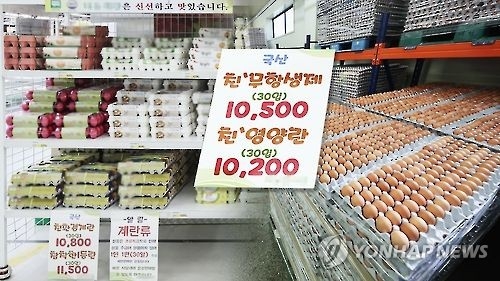 Prices of instant noodles, soda and beer have risen 5 to 10 percent since the second half of last year. The price of gasoline rose 1.4 percent on-year last month, and that of diesel 2.8 percent. It marks the first such increase for both since July 2013, according to Statistics Korea.

A weaker won against the dollar drives up consumer prices as local consumers have to pay more for imported products.

Local demand is on the decline at a time when there is a growing upward pressure on consumer prices.

The South Korean government has cut its economic growth forecast by 0.4 percentage point to 2.6 percent for 2017. Meanwhile, public and private institutions have already made downward revisions of their own growth estimates.

The state-run Korea Development Institute predicted that Asia's fourth-largest economy will grow 2.4 percent in 2017, while the Korea Economic Research Institute downgraded its estimate by 0.1 percentage point to 2.1 percent.

Still, experts remained cautious on whether South Korea could face stagflation, in which the inflation rate soars amid slowing growth. 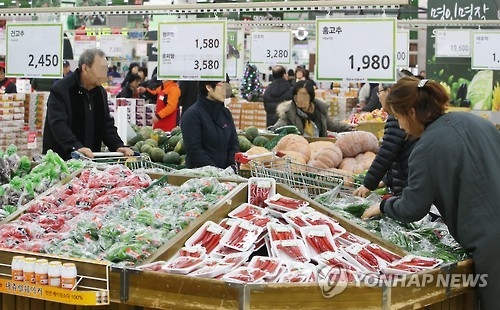 Kang Joong-koo, an economist at LG Economic Research Institute, said prices of agricultural and other products rose, but there is a low possibility of further surge in consumer prices due to a lack of demand in the domestic market.

He also said oil prices could not have a big impact on the economy as they have recently risen slightly following a dip.

Lee Sang-jae, an economist at Eugene Investment Co., also described the current economic situation as reflation -- in which prices rebound after a fall -- rather than stagflation, citing consumer prices will likely go up 1.7 percent this year, compared to 1 percent last year.

Lee also said prices of manufactured goods and services are unlikely to go up due to a lack of domestic demand, though prices of agricultural and other products rose.

Sung Tae-yoon, an economics professor at Yonsei University, said deflation eased in South Korea's economy as prices of fresh groceries went up, but price hike did not affect the manufactured goods.